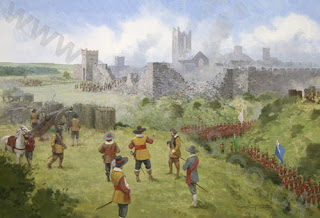 The defenders put up a spirited defense and cost their attackers dear. In a furious passion, Cromwell ordered that no quarter was to be given. Catholic priests and friars were treated as combatants and killed on sight and many civilians died in the carnage as the ‘Roundheads' ran amuck.

About 3,000 men of the Royalist garrison, both Irish and English soldiers were killed with the majority being put to the sword after they had laid down their weapons. The few hundred taken alive were shipped as slaves to Barbados. Aston was bludgeoned to death with his own wooden leg, which the Parliamentarian soldiers believed to be filled with gold coins.

"I am persuaded that this is a righteous judgment of God upon these barbarous wretches, who have imbued their hands in so much innocent blood and that it will tend to prevent the effusion of blood for the future, which are satisfactory grounds for such actions, which otherwise cannot but work remorse and regret."

For the Honourable William Lenthall, Speaker of the Parliament of England. Dublin, 17th September, 1649.

There is no doubt that by the conventions of War as then practised in the 17th century that the attackers had the right to destroy any caught in arms after the walls had been breached. On this occasion that ‘right' was carried out to the hilt. We know that at that time when a town was Stormed that it could be put to the Sack - usually of three days duration - and that all property and persons within were at the mercy of the troops. Sacking of towns and cities during the 30 Years War in Germany (1618-1648) most famously at Magdeburg in 1631 and indeed to some degree in the Civil Wars in Britain at that time showed what could happen once soldiers stormed a place.

*The view from the headquarters of Colonel John Hewson, in command of the attack on the eastern wall at the time of the second - and successful - assault on Drogheda. Gouache painting by Graham Turner