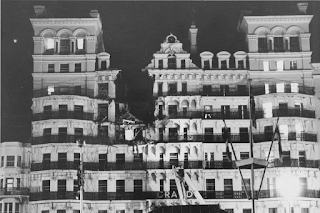 12 October 1984: An IRA bomb at the Grand Hotel, Brighton killed five members of the Conservative Party and narrowly missed killing the British Prime Minister Margaret Thatcher – it’s intended target. Until that time this was the most audacious attack ever undertaken against a British Leader. Thatcher was lucky in that her room was changed from the previous years and this saved her life. For the IRA bomber - Patrick Magee - had booked into her old room weeks previously and planted a bomb with a timing device primed to explode on the night she would arrive.

The bomb detonated at 2:54 a.m. on 12 October. The mid-section of the building collapsed into the basement, leaving a gaping hole in the hotel's façade. Firemen said that many lives were likely saved because the well-built Victorian hotel remained standing. Margaret Thatcher was still awake at the time, working on her conference speech for the next day in her suite. The blast badly damaged her bathroom, but left her sitting room and bedroom unscathed. Both she and her husband Denis escaped injury. She changed her clothes and was led out through the wreckage along with her husband and Cynthria Crawford (her friend and aide) and driven to Brighton police station.

Several more, including Margaret Tebbit—the wife of Norman Tebbit, who was then President of the Board of Trade—were left permanently disabled. Thirty-four people were taken to hospital and recovered from their injuries. When hospital staff asked Tebbit whether he was allergic to anything, he famously answered "bombs".

That night the IRA issued a statement:

Mrs. Thatcher will now realise that Britain cannot occupy our country and torture our prisoners and shoot our people in their own streets and get away with it. Today we were unlucky, but remember we only have to be lucky once. You will have to be lucky always. Give Ireland peace and there will be no more war.