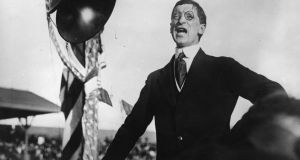 12 June 1919 - Eamon De Valera arrived back in New York - the city of his Birth. At around midnight on 11/12 June a rather bedraggled man walked into an Irish bar on 10th Avenue New York City. His aim - to begin a crusade for the recognition of an Independent Irish Republic. De Valera and his travels across America over the next 18 months were to become the stuff of Legend and controversy ever since.

His journey began in Dublin some weeks before when he slipped out of the city incognito and made his way to Liverpool to catch a boat the SS Lapland sailing to America. He was a wanted man after escaping from Lincoln jail in England some months previously and was on the run from the British. He kept undercover in a dingy cabin whilst aboard until just before he was spirited ashore to begin the first steps of his Mission.

As the last surviving Commandant of the Leaders of 1916 he was chosen as the príomh aire [President of Dáil Éireann] in April 1919 after his return from captivity in England. However  his chances of being captured again were high in Ireland. Dev was an excellent public speaker and a natural leader of men. To make the movement for Irish Independence a success it was deemed necessary to seek International recognition abroad and secure large funds from the Irish Diaspora to help the propaganda and war effort. He could do little in Ireland where his talents would be of limited use but in America he would be able to speak freely to push for Ireland’s Cause and gain swathes of publicity on a huge stage.

Dev was privately quite a self effacing man - he was by no means flamboyant. In America that was no path to success. Soon after arriving one of his Mentors [Joseph McGarrity] suggested to him that carrying his own luggage around and calling himself the title ‘President of the Ministry of Dáil Éireann’ was a dead end. He took him to a tailors and had him outfitted with a set of the finest suits - the Armanis’ of their day if you will - told him to not carry any bags - the President of a Country does not go around carrying his own bags  - and to style himself ‘The President of Ireland’!

Well it worked because he started getting attention and drawing huge crowds across the USA to hear him speak. For good measure he based himself in the finest hotel in America - the Waldorf - Astoria in New York city - as befitted the President of a Country visiting the United States of America. However his newly discovered status was a surprise to the Old Guard of Fenian’s there - led by Judge Daniel Florence Cohalan and John Devoy who basically viewed him as an upstart. They had ruled the roost there for years and wanted it kept that way.

By the time he returned to Ireland in December 1920 Dev had achieved quite a lot - especially financially in helping to raise millions of dollars for Irish Independence and making Ireland a front page issue with the US Press Corps. He did not however gain the support of either the Democrats or Republicans to recognise Ireland as an Independent Nation  in the 1920 Presidential Campaign - but at least he made them aware of it.  His biggest failure though was his inability to mend fences with the Fenian faction led by Cohalan and Devoy. It can be said that De Valera was a man who throughout his life took his own council and did what he thought was best -  problem was many of his opponents were of a similar calibre - neither side was blameless!