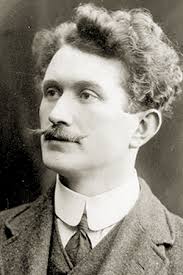 25 September 1917: Thomas Ashe died on this day. It was the 5th day of his Hunger Strike to secure Political Status for Republican prisoners. Born in Co Kerry in 1885 he was a member of the IRB and the Irish Volunteers. He took part in the Easter Rising in 1916 and led a column that successfully engaged the Crown Forces at the Battle of Ashbourne, Co Meath that week. He was sentenced to death in the aftermath but his life was spared as public indignation rose over the executions.


Released from captivity in June the following year he was in August 1917 arrested and charged with sedition for a speech that he made in Ballinalee, County Longford. He was detained at the Curragh but was then transferred to Mountjoy Prison in Dublin. He was convicted and sentenced to two years hard labour. Ashe and other prisoners, including Austin Stack demanded prisoner of war status.


Ashe went on hunger strike on 20 September1917. He died at the Mater Hospital, Dublin after being force-fed by prison authorities. At the inquest into his death, the jury condemned the staff at the prison for the "inhuman and dangerous operation performed on the prisoner, and other acts of unfeeling and barbaric conduct". His death through being forced fed elicited widespread revulsion amongst the Irish people and his funeral acted as a catalyst to the further growth of the Sinn Fein Party and Republican ideals.