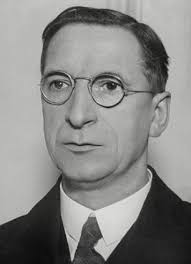 16‭ ‬February1932:‭ ‬A General Election held in the Irish Free State on this day.‭ ‬The president of the Executive Council,‭ ‬W.T.‭ ‬Cosgrave,‭ ‬[above top] called the election early as he wished to have it out of the way in time for the Commonwealth Conference of that year.‭ ‬There was growing unrest in the country and he felt that a fresh mandate was needed.‭ ‬He fought the campaign on a programme of bringing political stability to the State and that a change of Government would see people sympathetic to republicanism and communism in power.

Eamon De Valera [above below] on the other hand promised to free IRA prisoners,‭ ‬abolish the Oath to the King of England and to reduce the powers of the Governor General.‭ ‬He also indicated that more equitable social policies would be introduced at a time when the Great Depression was in full swing.

This change of government marked a watershed in the history of the State as De Valera went on to abolish the Oath to the King of England and to give the polity a much more Republican flavour including a new Constitution some years later.‭ ‬He remained in power through an unbroken series of election victories until‭ ‬1948.