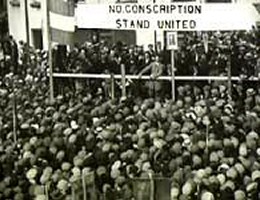 23 April 1918: A General Strike was carried out in Ireland against the threat of Conscription of Irishmen into the ranks of the British Army. The strike was near total in the three provinces of Connacht, Leinster and Munster but in Ulster things were too fraught with danger between Nationalists and Unionists for it to go ahead.

The catalyst for the strike lay in the huge defeats and losses that the British Army had suffered on the Western Front in the course of the War. By early 1918 the fortune of the War hung in the balance. On 21 March the Germans opened their Spring Offensive and swept all before them. Once again losses were huge and the British did not have the manpower left to make up the numbers. It was decided to extend Conscription to Ireland to help alleviate the pressure. Despite the protests of the Irish Party the Bill was passed by the British Parliament on April 16th by 301 votes to 103.

In the aftermath their MPs withdrew from Westminster and returned to Ireland where under the auspices of the Lord Mayor of Dublin at the Mansion House they formed a ‘National Cabinet’ with Sinn Fein & Labour to organise resistance to any attempt to enforce Conscription on the Irish People. The Leader of Sinn Fein Eamon De Valera was the one who drew up the format for an anti Conscription pledge that was to be taken in every parish of the Country on Sunday 21 April. It read:

Denying the right of the British government to enforce compulsory service in this country, we pledge ourselves solemnly to one another to resist conscription by the most effective means at our disposal.

On the evening of the same day, the bishops of the Catholic Church were holding their annual meeting at Maynooth and declared the conscription decree an oppressive and unjust law, calling on the Church's adherents to resist by the most effective means at our disposal - consonant with the law of God.

Fifteen hundred delegates from all parts of Ireland came together to a Trade Union Congress in Dublin to decide on a form of protest that would have the most effect. They decided on a one day General Strike to be held on 23 April. The Women’s Workers Union held a march through the streets of Dublin and vowed to support the Strike as well.

April 23rd was the day of the General Strike. Everywhere in Ireland except in Belfast, shops and factories were closed and trams and trains suspended while grave and orderly throngs of work-people walked about the streets. No newspapers appeared in the south or west. All licensed premises were close das were the small shops which were usually open on public holidays. In the large hotels guests were obliged to attend to their own needs. Hackney-car drivers refused to take passengers evening cases where visitors, anxious to go to the Punchestown Races offered a fare of ten pounds.
The Irish Republic by Dorothy Macardle

In the event the British Government did not go ahead with this Plan as they knew it could only backfire on them and would result in widespread bloodshed for very little gain. In June 1918 they dropped it as the War was once again turning in the Allies favour with the arrival of huge numbers of US troops in Europe. But its real significance was in uniting Nationalist Ireland - the Irish Party, Sinn Fein, Labour and the Church - under one platform against British Rule and a determination never to accept it again.