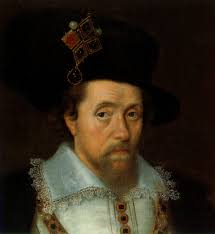 18 May 1613: The opening of Parliament in Dublin Castle on this day. This parliament had been called by King James I [above] in London in order to strengthen his rule in Ireland and to ensure that the Protestant Religion was the dominant one in that body. By doing this he would be able to get legislation passed for the raising of taxes and the enforcement of anti Catholic laws.

King James created some 40 micro boroughs (mostly in Ulster) in order to be able to ‘pack’ the Houses with Protestant supporters. In 1612 six of the major Catholic Lords of the Pale had written to him to complain about this:
the project of erecting so many corporations in places that constantly rank as the poorest villages in Christendom, do tend naught else but by the voices of a few selected for the purpose…extreme penal laws should be imposed on your subjects [i.e. Catholics]

But their protest was to no avail as James (a devout Protestant) was determined to see the measure through. He had once described the Catholics of Ireland as half subjects and he did not trust their loyalty to his Throne at all.

When the members of parliament met that day they consisted of 132 Protestants and 100 Catholics - even though over 85% of the population of the Country were Catholics! Of the Catholics, 80 were Old English and only 20 Gaelic Irish. In the House of Lords, the block vote of 20 Protestant Bishops gave the British Crown control of the Upper House in which also sat 12 Catholic and 4 other protestant peers.

In the event on the day mayhem ensued as clashes erupted inside the Castle as the supporters of both religions exchanged blows as to who should have the Speakers Chair. The Catholics peremptorily installed their own nominee Sir John Everard literally into the Chair while the other side had left the Chamber to be counted. On return they then sat their champion Sir John Davies on top of him! After a scuffle Everard was rejected and the opposition withdrew.

‘Those within the house are no house and Sir John Everard is our Speaker, and therefore we will not join with you, but we will complain to my Lord Deputy and the King, and the King shall hear of this’ exclaimed Sir William Talbot.

The whole proceedings had turned into a Fiasco, after a series of adjournments the parliament was prorogued on 17 June to await the results of an appeal to England.
Primary Source: Chapter VII of Early Modern Ireland Volume III: Pacification, plantation and the catholic question 1603-23 by Aiden Clarke with R. Dudley Edwards