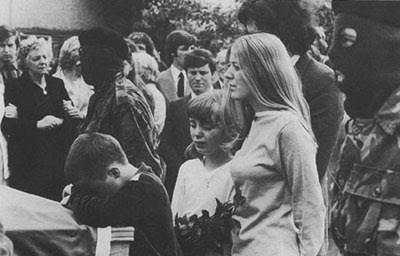 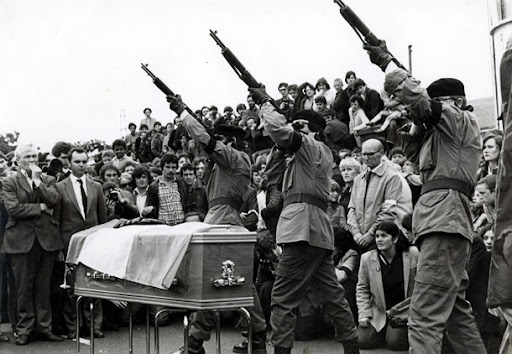 8 July 1981: The death of Joe McDonnell on Hunger Strike on this day. He died after 61 days without food. He was the fifth Republican prisoner to die that year in the ongoing campaign to gain Special Status for political prisoners.

Joe McDonnell was born in Belfast in 1950. He married his wife Goretti in 1970 and they had two children together. When the conflict erupted in the North Joe took sides and ended up in the IRA. He had joined the Republican Movement soon after the introduction of internment without trial in August 1971. He was himself interned on the prison ship Maidstone in 1972 and in Long Kesh from 1973 to 1974. He was captured in 1976 when the car he was in was stopped by the RUC and he and three other men (one of whom was Bobby Sands) were given long terms of imprisonment. He was sentenced to 14 years in prison.

McDonnell and many of the other Republican prisoners did not accept that they were criminals for fighting against the British Crown - something Irishmen had been doing for centuries. But in 1976 the British Government had abolished Special Category Status for political prisoners. From then on it could only be a matter of time till things escalated. By the Summer of 1981 a Hunger Strike was under way and a number of prisoners had died and others were in danger of dying.

Following the success of Bobby Sands being elected for Fermanagh South Tyrone prior to his death on 5 May it was decided by the Anti H Block campaign to contest the General Election in the 26 Counties that fell on 11 June that year. McDonnell was selected to contest the Constituency of Sligo-Leitrim. Veteran local republican John Joe McGirl was his election agent and Joe’s wife Goretti was conspicuous in her presence to help get him elected there. On the day of the election he received 5,639 1st preference votes - narrowingly missing being elected by a small margin.

When Joe McDonnell died on 8 July 1981 tensions were at razor point in the North. From Wednesday evening through to the Friday morning, Joe’s body had lain in state in the family home. During this time, thousands of people filed past the coffin to pay their respects to the fallen Volunteer.

When his funeral was held in Belfast some days later thousands of people followed the cortege on it way to Milltown Cemetery. Along the way the mourners were under close observation by the British Military. When they spotted an IRA Guard of Honour returning to a house after firing the final shots they swooped. Simultaneously, the British Army and RUC opened up on the cortege with a hail of plastic bullets amidst scenes of pandemonium and panic. The head of the funeral cortege had moved on a few minutes before the attack and was making its way towards Milltown. Six IRA Volunteers took the coffin on their shoulders for the last leg of the journey to the Republican Plot.

Today next to Bobby Sands he is the best known of the Hungers Strikers of 1981. He is the subject of a famous Republican Ballad written by Brian Warfield of The Wolfe Tones. It begins:

Oh my name is Joe McDonnell
From Belfast town I came
That city I will never see again...