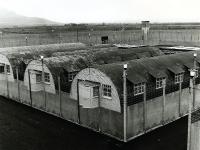 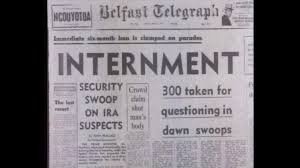 9‭ August 1971: The launch of Operation Demetrius on this day-  Internment without Trial was introduced by the British in the North of Ireland. In early morning raids the British army and the RUC lifted hundreds of men throughout the North in what was a ham fisted operation. Their aim was to catch as many members of the IRA in their homes as they could in one huge swoop.

‭But the introduction of internment was a logical next move in the escalating War between Irish Republicans and the British. The IRA were already of the opinion that their enemies would once again use this tactic as they had many times in the past & thus most of the key leadership figures had already gone ‘on the run’ by the time the round ups began. In the 1920s, 1930s, 1940s, 1950s and 1960s republican suspects had been imprisoned without trial by the British Government, but this time the exercise was to blow back in their faces.

What the British did not predict was the high level of resistance they encountered in Nationalist areas as men young and old were dragged away by the Crown Forces in full view of their terrified families.‭ There was widespread anger and within hours rioting had broken out in many areas. It quickly became obvious that the exercise was a huge fiasco and one with deadly consequences.

Relying on outdated lists containing‭ ‬450 names provided by the RUC Special Branch, the British Army swept into nationalist areas and arrested 342 men. Within 48 hours 116 of those arrested were released. The remainder were detained at Crumlin Road Prison and the prison ship 'The Maidstone' in Belfast Harbour. Hundreds were injured in the rioting that followed and‭ 12 people were shot dead that day – 2 British Soldiers, 7 Nationalists and 3 Loyalists.

The British Government had focused the entire strength of their Armed Forces on one community in the North and it was obvious to all as to whose side they were backing‭ – ‬a strategy even they had some qualms about but went along with to placate the Stormont Government of Brian Faulkner.

What they did not include was a single Loyalist.‭ ‬Although the UVF had begun the killing and bombing, this organisation was left untouched, as were other violent Loyalist satellite organisations such as Tara, the Shankill Defenders Association and the Ulster Protestant Volunteers. It is known that Faulkner was urged by the British to include a few 'Protestants' in the trawl but he refused.