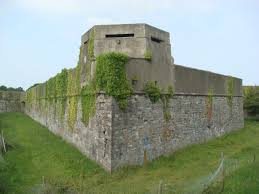 23 December 1939: The Magazine Fort raid occurred on this day. This fort, situated in the Phoenix Park in Dublin, was the central location for the small arms ammunition of the Free State Army. It was only lightly guarded and the routine followed had not changed in years. Security was lax and a raid was the last thing expected by those charged with guarding the structure. The IRA decided that because they were short of ammunition for their Thompson guns that a descent on the fort would yield results. As it turned out the amount of bullets seized was way above their wildest imaginings and beyond the capacity of the back up units to dispose of into safe arms caches.


On or about 10 O’Clock on the night in question a member of the IRA approached the MP on duty at the gate and explained he had a parcel for the Commanding Officer (who had gone out for the night). The hapless guard unbolted the entrance and was immediately confronted with a revolver in his face. Using him as a shield the intruder (now backed by other members of the team) made their way to the Guardroom where the rest of the tiny garrison promptly surrendered. While they were held captive a series of lorries were driven into the fort and the stockpile of ammunition was loaded on board before they departed into the night. Eventually soldiers in the nearby Islandbridge Barracks became suspicious of the volume of late night traffic in the vicinity of the Park and set out to investigate. Two of the raiders were apprehended but by then it was too late and the others had evaded capture.


This embarrassing episode caused shock and anger amongst the Government as over a million rounds of scare ammunition had been lifted. But the IRA were as surprised as anyone else at the scale of the haul and could not safely dispose of their new found supply. Most of it was recovered in January in raids North and South of the Border. Not only that but the events of this night led Eamon de Valera to bring forward emergency legislation to counter any threat to the State now that World War Two had broken out. He did not want to have to deal with any internal threats while the international situation was so fraught with danger. As a result Minister for Justice, Gerald Boland, at an emergency session introduced the Emergency Powers bill to reinstate internment, Military Tribunal, and executions for IRA members. It was rushed through and given its third reading the next day creating the Emergency Powers Act.