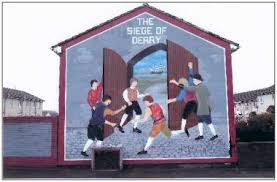 7 December 1688 - The Apprentice Boys of Derry closed the gates against King James' troops on this day. With the advent of King James II to the throne in 1685 religious animosity had grown between the Protestants and Catholics of Ireland. The former resented the growing power of the latter and they in turn suspected their religious opponents of disloyalty to the King in return. Events came to a head when a son was born to the King in June 1688. This meant that if the boy reached maturity he would succeed his father as a Catholic Monarch true to the Old Faith. But on 5 November of that year William of Orange landed in England and set himself in opposition to King James. A War between the Faiths looked inevitable and in Ireland this indeed proved the case.


King James wished to secure his position in this Country as at least here he could rely on the most widespread support from the Catholic population. The Catholic Earl of Antrim was ordered to secure the City of Londonderry for King James. The said Earl, Alexander MacDonnell, advanced to Derry with some 1200 men. He sent an advanced party across the river Foyle to enter and take the main gate and hold it until he brought up the bulk of his force.

Just at this moment thirteen young apprentices, most of whom appear, from their names, to have been of Scottish birth or descent, flew to the guard room, armed themselves, seized the keys of the city, rushed to the Ferry Gate, closed it in the face of the King’s officers, and let down the portcullis.
‘History of England’ by Lord Macaulay.


This was a setback for the Royal cause as it galvanised opposition amongst the Protestant population there to resist and await relief from England should (as was most likely) William succeed in his daring enterprise. As it turned out the city was not taken and despite much suffering held out until relieved the following Summer. It was a turning point in Irish History & indeed of British History as this act of defiance has imbued within the Protestant population of the North ever since a notion that loyalty to the Crown was conditional upon the Monarch being not a Catholic but one of their own.