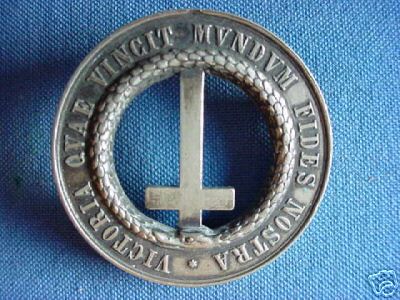 17 September 1860: Men of the Irish Battalion of St. Patrick of the Papal army fought a Piedmontese army under the command of General Brignone at Spoleto, Italy on this day. Spoleto is a walled city south of Florence with the fortress of Rocca on the side of a hill. Three companies of the Battalion of St. Patrick (312 soldiers & 15 officers) under the Battalion Commander, Major Myles O'Reilly (County Louth) were stationed there. Major O'Reilly commanded 645 men in total at Spoleto including 150 Italians, 160 Swiss, and 24 Franco-Belgians.

In spite of a long and heavy bombardment, the advancing Piedmontese troops were met with a withering fire by the Irish on the walls that stopped them in their tracks. However the bishop of Spoleto, distraught at the destruction and the loss of life, arranged a cease-fire. O'Reilly was nearly out of ammunition at that anyway. A Papal representative was sent to General Brignone and surrender terms were arranged. Brignone described O'Reilly as "both honourable and brave" and allowed the Irish to march out as prisoners with officers retaining their swords.

'Given the task of protecting the North Wall and the vital Gate House of the majestic Castle Albornozian, the Irish performed with distinction, holding their ground and the gate for 14 hours despite heavy hand-to-hand fighting and under constant bombardment from General Brigonne's field artillery. After withstanding repeated attacks, Major O'Reilly eventually negotiated a favorable surrender when reinforcements had become unlikely.'
http://www.thewildgeese.com/pages/popeirb2.html

For their service, each officer and enlisted man was awarded a commemorative service medal—Medaglia di Pro Petri Sede— 'Medal for the seat of Saint Peter' [above] and all those who fought were declared ‘meritorious of the Catholic Church, the Holy See and all human society’.