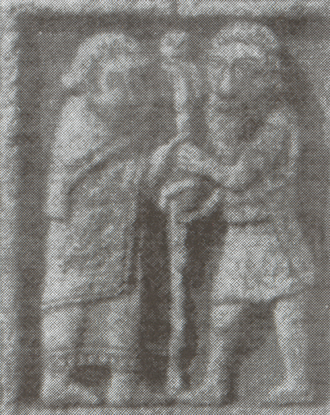 9 September circa 544/45 AD: The Feast of Naomh Ciarán (Saint Kieran) of Clonmacnoise on this day. He was born around 512 AD in Fuerty, County Roscommon. The son of Beoit, a carpenter and wheelwright, he inherited a love of learning from his mother’s side of the family, as his maternal grandfather had been a bard, poet, and historian. Baptized by deacon Justus, who also served as his first tutor he continued his education at the monastery of Clonard, which was led by St. Finnian. After completing his studies under Finnian, he left Clonard and moved to the monastery of Inishmore in the Aran Isles, which was directed by St. Enda.

After many wanderings he eventually settled at a location in the centre of Ireland, on the east bank of the River Shannon at a place called the meadows of the sons of Noise: Cluan mac Noise [as Gaeilge] or in the English language: Clonmacnoise. It was here he laid the foundations of what became one of Ireland’s greatest monasteries that was to last nearly one thousand years through many trials and turmoil's. St. Ciarán’s task was greatly eased by the help and lands he received from Diarmait mac Cerbaill, the last pagan King of Tara. However just not long after he had commenced his great work St. Ciarán died. His early demise was in all probability from an Bléfed - the Great Plague that was sweeping across Europe at that time - and had made its way to the shores of Ireland.

The panel above shows what is believed to be a representation of St Ciarán [left] and King Diarmait mac Cerbaill [right] planting a stake in the ground at Clonmacnoise. If so it shows the symbiotic relationship between Church & Kingship in early Christian Ireland - the Church gained protection and the King gained the blessing of the Church - even though in this case King Diarmait was a Pagan! However St Ciarán knew that the protection of the powerful was a necessary fact of life if the Church was ever to prosper and spread the Faith across the Land of Ireland.

Due to his great learning, his sanctity, and the generosity he displayed to those less fortunate in life and because of his prominence in the early Irish church, St. Ciarán is known as one of the “Twelve Apostles of Ireland.”