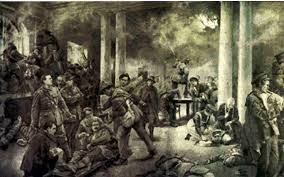 28‭ April 1916: The Insurrection continued in Dublin on this day.

General Sir John Maxwell arrived by boat from England.‭ ‬He came with orders to crush the Rising by whatever means were necessary. He was previously the GOC Egypt and a veteran of Britain’s Colonial Wars. He had recently suppressed a revolt of the Senussi People in the Western Desert. He issued a Proclamation:

The most vigorous measures will be taken by me to stop the loss of life and damage to property which certain misguided persons are causing in their armed resistance to the law.‭ If necessary I shall not hesitate to destroy any buildings within any area occupied by the rebels and I warn all persons within the area specified below, and now surrounded by HM troops, forthwith to leave such area.

By Friday morning much of the GPO was on fire and sections of the roof were collapsing.‭ ‬It was obvious to the men inside that they would have to evacuate the building sooner or later. One plan being considered was to tunnel through to the adjoining buildings and join up with the Four Courts garrison. However, this was not possible because of the worsening military situation. The British now had most of the streets around the GPO well covered with snipers and machine guns.

At around‭ 8 pm Padraig Pearse decided to evacuate the GPO, which was aflame and under constant bombardment.[above] He decided to try to escape via Henry Street and establish a new headquarters somewhere near there. The narrow streets around Henry Street and Moore Street were filled with smoke from the burning buildings. There was a great deal of confusion. In addition, nobody was quite sure exactly what the exact locations of the British Army were. Several groups of garrison tried to make their way down Henry Street but came under heavy fire. One of the casualties was The O’Rahilly who had come to Liberty Hall on Easter Monday to join the Rising even though he had initially tried to stop it going ahead.

Elizabeth O'Farrell,‭ had been one of only three women (all members of Cumann na mBan) left in the GPO after Pearse had ordered the others to leave that morning. She recalled:

We left in three sections,‭ ‬I being in the last. Commandant Pearse was the last to leave the building. He went round to see that no one was left behind. We immediately preceded him, bullets raining from all quarters as we rushed to Moore Lane.

Eventually Pearse,‭ Connolly, Plunkett, Clarke and MacDermott halted in a house at  Moore Street, number 16, where they planned to make their way through back streets to the Four Courts for a last stand. However the British were not much the wiser of their opponents movements and continued to attack the GPO even after it was evacuated.

British troops killed up to a dozen innocent civilians on North King St in heavy fighting.‭ At least some of these were killed in cold blood. But here only a handful of fighters remained and the British effectively controlled the area by nightfall.

In the north of County Dublin a Volunteer column under Thomas Ashe ambushed a convoy of RIC men.‭ A running battle between members of the RIC and the insurgents took place, lasting five hours. The police casualties were heavy: the Meath County and District Inspectors, two sergeants and four constables were killed, and 16 constables wounded. Ashbourne barracks was captured but Volunteers Thomas Rafferty and John Crennigan lost their lives.