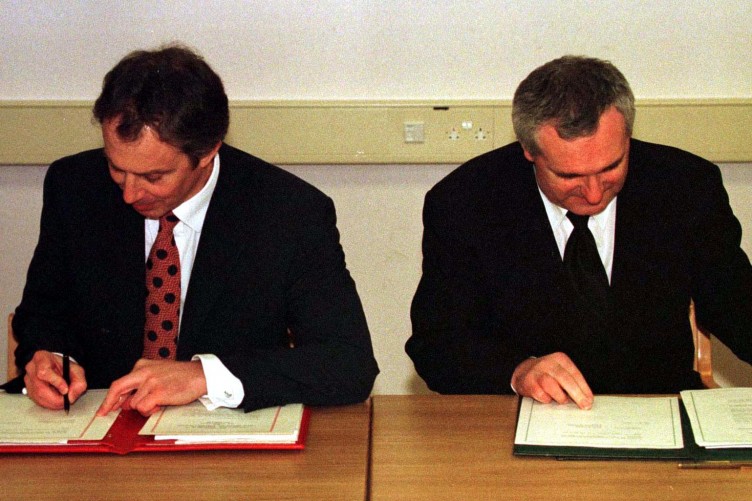 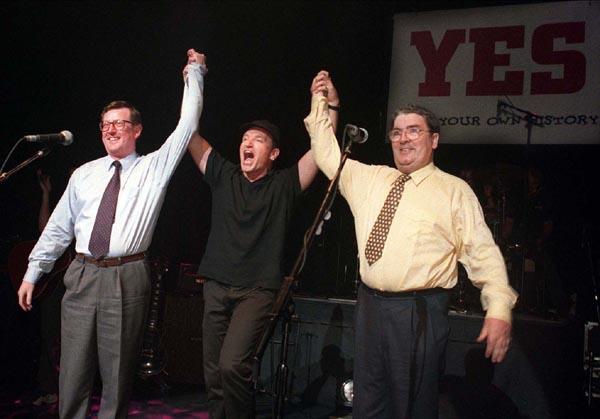 10 April 1998: The Good Friday Agreement was signed on this day. The agreement was entered into by various political parties in the North backed by the British and Irish Governments who simultaneously signed up to a new Treaty beteween the UK and Ireland to replace the Anglo- Irish Treaty of 1921.
The agreement was made up of two inter-related documents, both agreed in Belfast on Good Friday, 10 April 1998:
1. a multi-party agreement by most of Northern Ireland's political parties (the Multi-Party Agreement);
2. an international agreement between the British and Irish governments (the British-Irish Agreement).
It had taken years of tough and interminable negotiations to get to this stage, first to get a Ceasefire by Republicans and Loyalists in place and getting it to stick and then having Governments in place in Dublin & London with the ability and willingness to strike a Deal. There had also been a marked refusal and then a grudging reluctance by the Unionist side to engage in talks with Sinn Fein in particular. However nearly all Parties in Ireland and Britain accepted it when done with the notable exception of the DUP led by Rev. Dr. Ian Paisley.
The essential elements were the establishment of a Power sharing executive at Stormont that would include both Unionist and Nationalist Cabinet Ministers and the setting up of North- South bodies that would enable an active cross border element of co operation.  In addition the Dublin Government agreed to drop articles  2 & 3 of the Irish Constitution that stated that Ireland consisted of all the 32 Counties, a claim that to many Unionists a sense of entitlement to rule over the North without their consent.
The Agreement then accepted that:
“it is for the people of Ireland alone, by agreement between the two parts respectively and without external impediment, to exercise their right of self-determination on the basis of consent, freely and concurrently given, North and South, to bring about a United Ireland, accepting that this right must be achieved and exercised with and subject to the agreement and consent of a majority of the people of Northern Ireland”.
The Agreement put in place a framework to establish a number of political institutions. This framework is made up of three strands, together representing the relationships that exist within and between the islands of Britain and Ireland.
Strand One
The Northern Ireland Assembly and Executive were set up so that the elected political parties could share power. The Assembly is located at Stormont, just outside Belfast.
Strand Two
The North South Ministerial Council was set up to develop co-operation between both parts of Ireland.
Strand Three
The British-Irish Council was set up to promote the relationship between Ireland and Britain.

There were two separate endorsements of the Agreement in both parts of Ireland held on 22 May 1998. In the North some 71% of voters accepted it and in the Republic it was passed by 94% of the Electorate.

These devolved institutions only operated intermittently in the years immediately following the Good Friday Agreement, and the Irish and British Governments have continued to work with the parties to build trust and confidence but as things stand on its 22nd anniversary the Power Sharing Executive is now back up and running in a somewhat shaky structure which may or may not last - but at least there is Peace in the North.