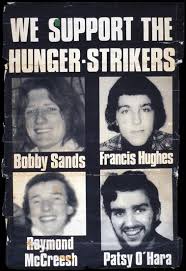 21 May 1981: The Third and Fourth Irish Hunger Strikers Died in Long Kesh Prison on this day.
Raymond McCreesh (24), an Irish Republican Army (IRA) prisoner, and Patsy O'Hara (23), an Irish National Liberation Army (INLA) prisoner, both died having spent 61 days on hunger strike. Tomás Ó Fiaich, then Catholic Primate of Ireland, criticised the British government's attitude to the hunger strike.
The two men were preceded by Bobby Sands (5 May) and Frankie Hughes (12 May) in their struggle for political status.

Their 5 demands were:
The right not to wear a prison uniform;
The right not to do prison work;
The right of free association with other prisoners, and to organise educational and recreational pursuits;
The right to one visit, one letter and one parcel per week;
Full restoration of remission lost through the protest.

But perhaps what they felt is best summed up in these lines from this H Block Ballad:

But I'll wear no convict's uniform
Nor meekly serve my time
That Britain may call Ireland's fight
Eight hundred years of crime.