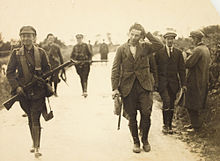 24 May 1923: The Irish Civil War ended on this day. The newly appointed IRA Chief of Staff Frank Aiken issued the order to ‘dump arms’. It began:

To All Ranks:
Comrades - The arms with which we have fought the enemies of our country are to be dumped. The foreign and domestic enemies of the Republic have for the moment prevailed...

The war had its origins in the Anglo Irish Treaty of December 1921 which agreed to the establishment of the Irish Free State. This State though would only govern 26 Counties and not the Six Counties of the North which would remain under British rule. More importantly it contained a commitment that anyone elected to the Southern Parliament would take an Oath of Fidelity to the King of England George V. This was anathema to those who supported the ideal of a fully independent Irish Republic. The Sinn Fein party and the IRA split on the issue and after months of haggling and negotiations the two sides were further apart than ever.

Following the June elections which saw a majority of voters backing pro Treaty candidates the war broke out on 28 June when the Free State Army (with borrowed British cannons) bombarded the Republican garrison occupying the Four Courts in Dublin.

As the months went by the FSA gained control of all the major cities and towns and the fighting degenerated into a ‘Dirty War’ with atrocities committed by both sides. A policy of Official Executions was adopted by the Free State against any men taken in arms. 77 men were shot in this manner and many more were killed out of hand in the countryside. Thousands of men were captured or interned and some women imprisoned. Most of the Irish People wanted Peace and not more War - they had had enough.

By the early Spring of 1923 it was obvious that the IRA could not win and attempts to bring the fighting to an end intensified as the situation became hopeless for them. Early Peace moves had failed but now the push for an end to the campaign came from within the IRA itself. The death in action of Liam Lynch, the IRA Chief of Staff on 10 April 1923 paved the way for the next move - a Ceasefire. Frank Aiken was appointed to the position and on 30 April called that Ceasefire. On 14 May a Joint meeting of the Republican Government and IRA Army Executive instructed Aiken to end the war.

This was followed on 24 May by an Order to ‘Dump Arms’.

Éamon de Valera supported the order, issuing a statement to Anti-Treaty fighters on 24 May:

Soldiers of the Republic. Legion of the Rearguard:

The Republic can no longer be defended successfully by your arms. Further sacrifice of life would now be in vain and the continuance of the struggle in arms unwise in the national interest and prejudicial to the future of our cause. Military victory must be allowed to rest for the moment with those who have destroyed the Republic.

The Irish Civil War was over - though it’s Legacy was to cast a giant shadow over Irish politics for generations to come....