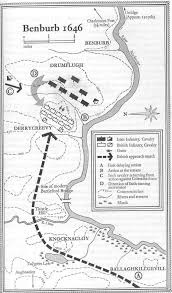 5 June 1646: The Battle of Benburb/ Cath Beann Borb was fought on this day. General Owen Roe O’Neill met and defeated a superior enemy force at Benburb. The battle was fought near the river Blackwater on the border between the counties Tyrone and Armagh. He had deliberately chosen a defensive position on which to meet a British Army under Major-General Robert Monroe. The British men had marched many miles in the days preceding the battle, fighting a series of tiring skirmishes against the Irish on the way. On the day of the battle itself his men had marched some 15 miles before they came up upon the Irish positions. O'Neill's men on the other hand were well rested and some were in concealed positions so the British did not know they were up against O'Neill's Main Force until the battle was joined.

O'Neill and Monroe were both experienced commanders, O'Neill had fought in the Spanish Army in the Low Countries and had conducted a brilliant defense of the town of Arras in 1640 for weeks against overwhelming odds against the French before been forced to surrender. Monroe was a veteran of the 30 Years War in Flanders and Germany.

O'Neill was determined to bring his opponent to battle on his own terms by taking up a position that would convince the enemy to attack at a disadvantage. Described 'as a man of few words, cautious and phlegmatic in his operations' 'this great adept in concealing his feelings' as the Papal envoy Rinuccini called him.

O'Neill kept his plan to himself but its possible he sent a 'deserter' across the lines to point Monroe in the right direction for the battle to be sprung. The British army had crossed the river Blackwater after advancing from Armagh was advancing from the south west upon the Irish with the river on their right flank. The battle took place just over three miles south-east of Charlemont Fort in what is now County Tyrone.

The Scottish commander had over 6,000 men, made up of six Scottish and four English regiments of foot and around 600 horse. Monroe's infantry was two-thirds musketeers and one-third pikemen. Monroe also had six light cannon with him. O’Neill’s Army consisted of about 5,000 foot, half of whom were pikemen and half musketeers, and 500 horse, many of whom were lancers. He drew up his men with four brigades in the first line and three in the second. The Irish had no artillery available at all.Before the clash of arms, Father Boetius Mac Egan, Chaplain General of the Army, gave general absolution to the O'Neill's men.

O'Neill delayed the advance of Monroe's Army with lines of skirmishers, falling back step by step. The battle proper then did not begin until late in the day. When the British, confident of victory, finally attacked the Irish lines they were beaten off. Once this attack had been checked O’Neill gave the order to advance with his famous exhortation to his men:

Let your manhood be seen by the push of your pike
- your word is 'Sancta Maria'
- and so in the name of the Father, the Son and the Holy Ghost
Advance!
- and give not fire till you are within pike-length.

With that the Irish lines went forward to break the enemy's lines. By this stage the sun and wind were behind the Irish lines giving them a distinct tactical advantage. After about an hours' heavy fighting late in the evening the British lines began to buckle. Eventually most Monroe's troops broke and ran. Monroe was lucky to escape with his life and he lost probably half of his men in this rout, some 3,000 or so. Only Sir James Montgomery's Regiment getting away in good order. Much of his baggage and all of his artillery was taken. Irish casualties were in the low hundreds and they were left masters of the field as the sun went down. It was the greatest Irish Victory of the War of the Confederation.