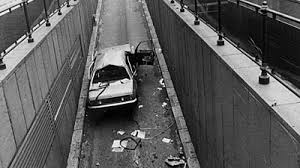 30 March 1979: The British M.P. Airey Neave was assassinated in the car park of the House of Commons, London on this day. Tipped to be Margaret Thatcher’s Secretary of State in the North if she won the upcoming General Election, his death at the hands of the INLA was a severe personal blow to her, which she felt for many years after. A noted hardliner with links to Britain’s’ Secret Service he was an ex British Officer (DSO & MC) who had made it known he intended to rule the North with an Iron Hand if he was appointed as Secretary of State.

He had served with distinction in the Second World War (DSO; MC) He was the first officer to make "the home run" from Colditz, and the intelligence from this experience brought about his appointment to M19, where he was code named "Saturday". His book Saturday at MI9 was a bestseller. When the War ended, he became assistant secretary of the International Military Tribunal in Nuremberg, and had the task of serving indictments on the Nazi war leaders who had survived Hitler. Another book, Nuremberg, dealt with the part he played there. He entered Parliamentary politics in 1953.


Neave was driving his car up the ramp leading out of the Commons car park at around 3 pm when the mercury tilt switch attached to his vehicle blew up underneath him. Emergency services were on the scene in minutes. The 63-year-old Conservative MP was taken to Westminster Hospital where he died from his injuries.


Mrs Thatcher was gutted by the news at the loss of her close friend and political ally. She proclaimed that:


He was one of freedom's warriors. Courageous, staunch, true. He lived for his beliefs and now he has died for them.

The British General Election of that year had just been called the day before and Mr Neave was a close adviser to Mrs Thatcher, he had led her campaign to become the Conservative Party leader in 1975 and headed her private office.
Posted by Columba Iona at 14:48