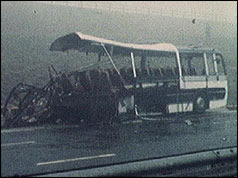 4 February 1974: The M62 Coach bombing on this day: Eleven people - including eight British soldiers and two young children - were killed, and 12 seriously injured, when the coach they were travelling in was blown up by an IRA bomb in England.

The private coach was carrying more than 50 people and making its way from Manchester, along the M62, towards a British army base in Catterick, North Yorkshire, when an explosive device in the rear of the vehicle detonated. The explosion happened just after midnight on the eastbound carriageway between Chain Bar, near Bradford and Drightlington, south of Leeds. It could be heard over an area of several miles and scattered bodies for 250 yards along the road.


The coach was carrying soldiers and their families who had been on a weekend break; some of the servicemen were travelling to RAF Leeming, near Darlington. A family of four - Cpl Clifford Haughton, his wife Linda, who were both 23, and their two sons, Lee, five, and Robert, three - were among the dead.


An Englishwoman Judith Ward was convicted of this attack and spent 18 years in prison as a result. At the time of her trial Ward's father, Thomas, had said earlier he did not believe his daughter was capable of such "brutal and callous acts". Her brother, Tommy, said none of the family thought Judith had ever been in the IRA. "We don't think she was so heavily involved. There has been a lot of romancing," he said.

That was a point echoed in court by Ward's solicitor, Andrew Rankin QC, who highlighted many improbabilities in her confessions. They included having been married to an IRA man and having borne a child by another.

Her conviction was always suspect but it took 18 years before it was overturned in 1992 and she was released from captivity. It was one of a series of convictions in the British Courts in the 1970s that were seen by many as 'miscarriages of justice' and that further marred Anglo Irish relations at that time.