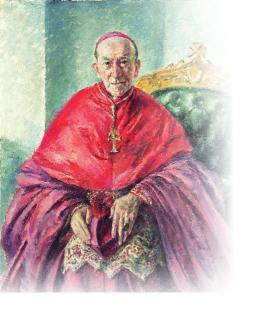 He was born in Cootehill, Co. Cavan, on 28 July 1895, to Dr. Eugene McQuaid and Jennie Corry. His mother died a week later and his father, a doctor, signed her death certificate. A little over a year later he married a woman named Agnes, who raised John and his sister Helen as her own. In his teens John learned that Agnes was not his real mother. Further children were born to Eugene and Agnes McQuaid.

Educated at Blackrock College and Clongowes, two of the top private Catholic schools in the Country, he went on to complete his University Education at UCD where he mastered on the Life of the Roman pagan philosopher Seneca. He then took up his studies for the priesthood and was ordained at Kimmage in Dublin in 1924.

After a brief stay in Rome he returned to Ireland and was appointed to the staff of Blackrock College in 1925. He served as Dean of Studies from 1925–1931 and President of the College from 1931–1939. In this time he ran the school with a strict hand and encouraged the boys in Sport, Rugby in particular and also in classical studies.

However it was in his role as advisor to the President Eamon De Valera that he is best known for ensuring that a strong Catholic ethos was written into the new Irish Constitution of 1937, where the ‘Special Position’ of the Church was specifically recognised. Though recent commentators have pointed out that this had no actual legal meaning as such. It was removed from the Constitution in 1972 in a Referendum.

In 1940 McQuaid was appointed Archbishop of Dublin and from the start he had some overriding concerns. He wanted to ensure that the Church remained dominant in Irish Society and that a Catholic education was given to the children of the Diocese He also had great concerns about the widespread poverty in the city and encouraged acts of Charity towards the poor.

He was basically a typical Irish Archbishop in religiosity but with a lot more intelligence, drive and determination than most. His most controversial moment came in 1951 when he became embroiled in the legislation for a Bill that was before the Irish Parliament (the Dáil) that was known as the Mother & Child Scheme. McQuaid opposed it as giving more power to the State as against the Church. He was not the only one and the Irish Medical Organisation also rowed in against it for reasons of their own. The popular Minister of Health, Noel Browne, was forced to resign. But it proved a Pyrrhic Victory for the Church and for McQuaid in particular as public opinion slowly moved away from accepting the Church as the primary source of moral authority.

Further controversy dogged him in 1955 when he voiced opposition to the visit of the Communist soccer team from Yugoslavia (where in fairness Catholics were given a hard time) to Dublin yet over 20,000 people turned up to see them!

But Ireland was changing and even more so after 1960 when increased social prosperity brought into being new ways of thinking. The arrival of Television and foreign travel meant that people had a broader view of the World and its many and varied ways than heretofore.

It was though the opening of the Second Vatican Council in Rome in 1962 that put the cat amongst the pidgins as many of the Faithful saw hope for fundamental change in the strict and outdated modes of operation of the Church. McQuaid was deeply suspicious of change and made it pretty clear where he stood on the issue. He will always be remembered for his attempt to reassure his flock at the end of the Council that "No change will worry the tranquillity of your Christian lives".

His eminent position in the decision making process of the Irish State became an increasing anachronism as the 1960's wore on. Politicians offering him public deference became a source of embarrassment and indeed anger to many voters, particularly in the upwardly mobile classes in South Dublin, where McQuaid lived himself.

He was a shy and reserved man who lived frugally and alone. He visited the sick in hospitals nearly every night and ensured that the Church’s works of Charity continued unabated. But these are now almost forgotten and his perceived errors of judgement remembered.

Dr. McQuaid formally relinquished the government of the Archdiocese of Dublin when his successor was ordained Archbishop in February 1972.

‘On Saturday 7 April 1973 McQuaid was too ill to get up at his usual time of 6.30am to say Mass at his private residence in Killiney Co. Dublin. He was taken to Loughlinstown Hospital where he died within an hour. Shortly before his death he asked nurse Margaret O'Dowd if he had any chance of reaching heaven. She told him that if he as Archbishop could not get to heaven, few would. This answer appeared to satisfy him and he lay back on the pillow to await death. He died at about 11am. He is buried in St. Mary's Pro-Cathedral in Dublin, the seat of the Roman Catholic Archdiocese.’