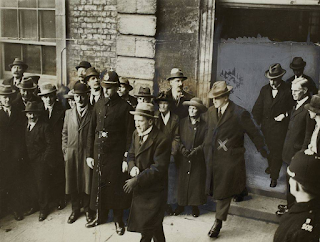 16 January 1922: Michael Collins led the Irish delegation that arrived in Dublin Castle to start the handover of government administrative departments to the new regime. This came about when the British started transferring power to the Irish Provisional Government set up under the terms of the Anglo - Irish Treaty of December 1921 . They were met by Britain’s’ Lord Lieutenant FitzAlan who was to formally hand over the Civil Service for the area designated to be included in the Irish Free State.
A volley of cheering came from Dame Street and immediately three taxicabs bearing Mr. Michael Collins and his seven colleagues in the Provisional Government whisked through the eastern archway and swung round to the entrance of the Chief Secretary’s office pursued hot-foot by numerous photographers. Mr. Collins bounded from his car through the hospitable portals, and was lost to view, to the chagrin of the camera men. Swift at his heels were Mr Cosgrave, Mr Duggan, and the others. They had all passed through before most of the officials, anxious to catch a glimpse of their new “chiefs”, were aware of their arrival.
Irish Times 17 January 1922
'The eight members of the new Provisional Government, in three taxi cabs, made their way past cheering crowds, through the Castle’s Palace Street Gate and drove up the hill into the Upper Castle Yard. Led by Michael Collins, these ‘Strange Visitors’, as the Belfast Newsletter described them, quickly made their way through the doorway of the Chief Secretary’s Office in the north-east corner of the Yard. They were observed by journalists and photographers, Castle officials and soldiers, and a few lucky members of the public.
Once inside, the party made their way upstairs to the Privy Council Chamber, a ‘purple and gilded’ room above the archway that connected the Upper and Lower Castle Yards. The original room no longer survives – that wing of the Castle was reconstructed in the 1950s – however, The Irish Examiner remarked that the ‘simple stateliness of the Chamber with its two great brass chandeliers, pendant over the red cloth-covered table which occupies the centre of the room, must have impressed the new Ministers’.'
16 January 1922: Remembering the Handover of Dublin Castle to Michael Collins | Dublin Castle
The Dublin playwright Séan O' Casey, described how FitzAlan handed over Dublin Castle and seemed to be doing it as if in a dream: "here's the key to the throne room, and this one's the key of St. Patrick's Hall, my good man".
The official account of the handover, released by Dublin Castle at 4 pm that day, reads:
'In the Council Chamber at Dublin Castle this afternoon his Excellency the Lord Lieutenant received Mr. Michael Collins as the head of the Provisional Government provided for in article 17 of the Treaty of 6th December. Mr. Collins handed to the Lord Lieutenant a copy of the Treaty … and other members of the Provisional Government were then introduced. The Lord Lieutenant congratulated Mr. Collins and his colleagues, and informed them they were now duly installed as the Provisional Government … He wished them every success in the task that they had undertaken and expressed the earnest hope that under their auspices the ideal of a happy, free and prosperous Ireland would be attained.'
The Castle had been laid out circa 1200 AD on instructions from King John of England to act as a secure base which the English could use to conquer Ireland. Through all the centuries of strife, wars and revolts it had never been taken, despite serious attempts to do so in 1534, 1641 and 1916. It had remained the focal point of the Royal Administration down through the years and a physical symbol of the Occupation of Ireland. So the early hand over of this ancient fortress to the supporters of the Free State was a useful coup for Collins and Cosgrave as it showed that the British were serious about leaving the 26 Counties and thus getting out of Dublin forever.
Picture: Kevin O’Higgins followed by Michael Collins leaving the meeting with  Lord Lieutenant FitzAlan guarded by a pair of formidable Constables of the Dublin Metropolitan Police.
Posted by Columba Iona at 05:37