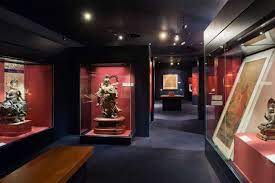 24 January‭ 1957: Sir Alfred Chester Beatty became the first Honourary Irish Citizen for his distinguished service to the Nation on this day.

Born in New York in‭ 1875 Chester Beatty made his Fortune as a Mining Engineer. He set up a highly successful mining consultancy firm in that city in 1908. By pioneering a new method of extracting copper from low-grade ore he made a Fortune in international mining operations. He was known as 'the king of Copper' and was a millionaire by his early '30s.

However tragedy struck in‭ 1911 when his wife died and he then moved London where he began anew. He remarried in 1913 and visited Egypt on the eve of the Great War where his already considerable interest in Oriental artefacts was whetted when they bought ancient Koranic scripts in the bazaars of Cairo. The dry climate there suited Beatty and he wintered in Egypt on many occasions.

In‭ 1917 he went further East and developed a deeper interest Chinese and Japanese paintings. In the inter war years he became one of the World’s greatest collectors of non western fine arts and was renowned for his great collections of Objects de Art that he amassed. He became a naturalised British in 1933.  During the Second World War he materially helped the Allied cause by ensuring that vital supplies of raw materials were shipped to the relevant destinations where they could be used in the War Effort. For these services he was Knighted by the British.

In‭ 1950 he decided to move to Ireland and it was here he decided to set up a museum for his collection of priceless artefacts. In 1953 he purchased a large house on Shrewsbury Road in Dublin and it was here that the collection stayed for many years. He was made an honourary Citizen in 1957 and when he died in 1968 was accorded a State Funeral. His great collection is today housed in the grounds of Dublin Castle where it is permanently open to the Public.