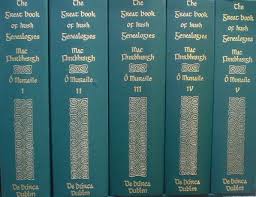 28 December 1650: In Galway city Dubhaltach MacFhirbhisigh, last of the great scribes of Ireland, added an index of just under three thousand entries to his masterpiece the Leabhar na nGenealach, or the Book of Genealogies on this day. An index was rare in a Gaelic manuscript and MacFhirbhisigh was probably adapting more modern methods to his enormous work. In its current printed edition it runs to five volumes. The work is a compilation of Irish genealogical lore relating to the principal Gaelic and Anglo-Norman families of Ireland and covering the period from pre-Christian times to the mid-17th century and collected from a variety of sources


The fact that many of these sources no longer exist adds considerably to the value of Mac Fhirbhisigh's work. This great work stands comparison with The Annals of the Four Masters and is all the more remarkable for being the work of just one man. Preserved over the centuries it was not printed in full until Mayoman Nollaig Ó Muraíle published his comprehensive edition in five volumes (by De Burca books) in 2004. This is one of Ireland’s greatest Literary/Historical Treasures.