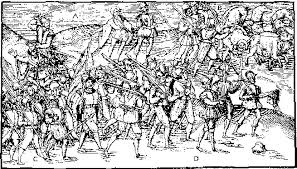 2 October 1600: The Battle of the Moyry Pass /Cath Bealach na mhaighre on this day. The 'Gap of the North' was the traditional invasion route between Ulster and Leinster going back centuries. It began with a clash of arms between the forces of Aodh O’Neill, Earl of Tyrone and the army of the English Viceroy, Lord Mountjoy. He brought with him some 3,000 foot soldiers and 300 cavalry to try and crush O'Neill's revolt against the English Queen Elizabeth I. The size of O'Neill's force is unknown but was probably in the range of 1,500-2,000 men of all arms.


The battle was initiated by Mountjoy who tried to force his way through the pass west of Newry, which the Irish had fortified. His forces were repulsed with loss and despite repeated attempts over the following days he could not break the Irish lines.


On the 9th he withdrew towards Dundalk. Honour satisfied and with his supplies low the Earl withdrew towards Dungannon. Mountjoy then cautiously advanced through the Pass to build Fort Norris and in which he placed a garrison of some 400 men. He then went back to Dundalk, not through the pass (where an ambush was possible), but by way of Carlingford. However O'Neill attacked him anyway when he withdrew and harassed his columns from the woods as they marched by the lough.


But the lateness of the season meant this campaign was now over. O’Neill had done enough to stymie the Viceroy’s attempt to take Dungannon that year and cost the English hundreds of casualties in their futile attempts to take his power base. But Irish losses were heavy too and O'Neill could not so easily replace the expenditure of arms and munitions like Mountjoy was capable of so doing. Of the defences the English encountered in this battle one wrote he never saw: a more villainous piece of work, and an impossible thing for an army to pass without intolerable loss.