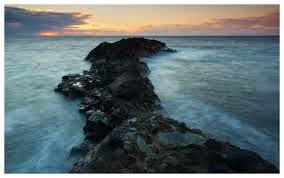 28 October 1588: The Girona, a 700 ton Neopolitan gallass was wrecked off the north coast of Ireland at Lacada Point [above], Co Antrim on this day. The Lacada/Liach Fada (the long stone) is a rock promontory that juts into the ocean a few hundred yards west of the Giant's Causeway. The Italian built ship had been part of the ill fated Spanish Armada which Philip II had dispatched from his dominions to restore England to the Catholic Faith.


The Girona was a galleass - an oared fighting ship, designed for Mediterranean warfare. But she performed extraordinarily well in northern waters, and survived the coast of Ireland with need of only slight repairs. On board were the survivors of two shipwrecks that had been washed upon the Irish shore. The Girona had picked them up at Killybegs, County Donegal.


The Commander of the vessel was a brave and charismatic Spanish Don Alonso de Leyva.


He was described by an Irish sailor (James Machary) as:


Don Alonso for his stature was tall and slender


of a whitely complexion


of a flaxen and smooth hair


of behavior mild and temperate


of speech good and deliberate


greatly reverenced not only of his men


but generally of all the whole company


The Downfall of the Spanish Armada in Ireland


Don Alonso decided that overladen as she was the best plan was to make for neutral Scotland and pick up more shipping there for the dash back to Spain. With over 1,300 men inside the ship she was sluggish in the stormy waters and despite having over 200 oars to guide her passage was vulnerable to any contrary turns of weather. In a storm the oars would have been useless.


Initially her luck held and she made progress towards the Scottish coast. But the wind turned to the north west and pushed her back onto the rocky Antrim shores. Disaster struck when her rudder snapped off and she drifted a helpless hulk upon the waters. In despair the crew and passengers, including some of the noblest names in Spain, could only pray for Eternal Salvation as they were cast to their doom upon the rocks of Lacada Point. Just a handful survived the ordeal and were rescued by the Irish of that coast.


While nothing now survives of the wreck, over the last 40 years the place where she sank, has yielded a rich haul of treasure - pathetic gold and jewelled trinkets, badges of rank, religious charms, tenderly inscribed love-tokens, money chains and nearly 1,200 gold and silver coins. A testimony to the riches in the possession of some of Spain's best families on the night that they perished. Much of this recovered haul is now on display at the Ulster Museum in Belfast.


Thus perished some of the scions of the noblest families of Spain on that terrible night all those years ago.
Posted by Columba Iona at 12:24