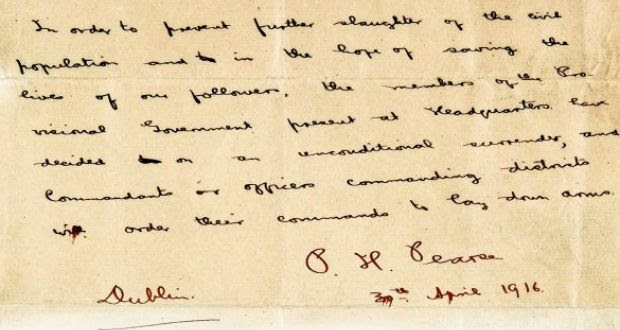 30‭ ‬April‭ ‬1916:‭ ‬The Rising in Dublin fizzled out on this day

Sniping had continued overnight as the Rising came to an end.‭ ‬The captured insurgents who were held outside the Rotunda over the night were marched off to Richmond Barracks,‭ ‬Inchicore.‭ ‬Here they were screened and questioned by detectives of the DMO‭ ‘‬G‭’ ‬Division under military supervision.


In his Prison Cell Padraig Pearse wrote out a brief note reiterating his instructions of the previous day that was forwarded on to the Republican Garrisons that still held out:

In order to prevent further slaughter of the civil population and in the hope of saving the lives of our followers,‭ ‬the members of the Provisional Government present at headquarters have decided on an unconditional surrender,‭ ‬and commandants or officers commanding districts will order their commands to lay down arms.‭ ‬
P.H.‭ ‬Pearse.‭ ‬Dublin‭ ‬30th April‭ ‬1916.


This brought about the surrender of the various outlying Insurgent positions as orders were brought to them to lay down their arms.‭ However at first the various garrison Commanders refused to believe that the Rising was over and had deep suspicions that the messages brought to them were genuine. But by late afternoon it became apparent that the fighting had stopped and further confirmation arrived that the messages were indeed genuine.


By last light that day the Rising in Dublin was effectively over.


The cost had been high, some 485 people were dead and over 2,500 wounded. The centre of the City of Dublin was in ruins and the financial cost ran into the millions. It estimated that about half the casualties of Easter Week were innocent civilians. Nothing would ever be the same again after the most seminal event in modern Irish History.