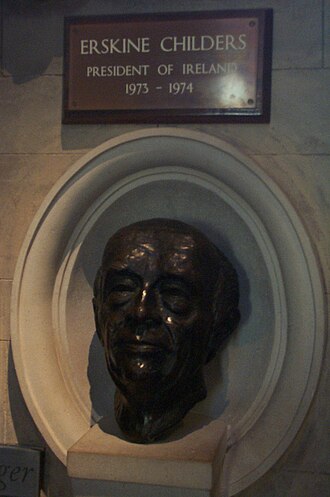 He was born in London in 1905, the son of patriot and author Robert Erskine Childers, who was behind the Asgard ship gun-running in 1914. Childers junior followed in his father’s republican footsteps. In 1922, when Childers was sixteen, his father was executed by the new Irish Free State on politically inspired charges of gun-possession. The pistol he had been found with had been given to him by Michael Collins. Before his execution, in a spirit of reconciliation, the older Childers obtained a promise from his son to seek out and shake the hand of every man who had signed the death warrant.

He was first elected to the Dáil as a Fianna Fáil TD for Athlone-Longford in 1938 and held several ministerial offices. He was Minister for Posts and Telegraphs (1951-54) and oversaw the liberalisation of Radio Éireann in 1960. He served as Minister for Lands (1957), Minister for Transport and Power (1959-69) and Tánaiste and Minister for Health (1969-73).

For the Presidential Campaign of 1973 Childers was nominated by Fianna Fáil at the behest of Eamon de Valera, who pressured Jack Lynch in the selection of the presidential candidate. He was a controversial nominee, owing not only to his British birth and upbringing but to his Anglo-Irish background. However, on the campaign trail his personal popularity proved enormous, his accent and Gravitas proving an asset rather than a handicap. In a political upset, Childers was elected the fourth President of Ireland on 30 May 1973, defeating Tom O'Higgins of Fine Gael by 635,867 votes to 578,771.

Childers had ideas to change the nature of the Presidency but in this he met opposition from Liam Cosgrave of Fine Gael who had just been elected Taoiseach. He wanted the President to stay out of as much a possible and remain merely a figurehead. A role that Childers felt uncomfortable in and it is believed he contemplated resigning on more than one occasion. However fate intervened and Erskine Childers tenure as President was to be a short one.

On 17 November 1974, just after making a speech to the Royal College of Physicians in Dublin, Childers suffered a heart attack. He died the same day at the Mater Hospital Dublin. His funeral was in St Patrick's Cathedral Dublin.* He was buried in the grounds of the Church of Ireland Derralossary church in Roundwood Co Wicklow.

His daughter Nessa Childers has continued his family’s involvement in Irish Politics and is today an MEP in the European Parliament.
* Where his bust is displayed as above