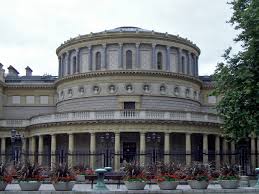 25 November 1913: The foundation of the Irish Volunteers in the Rotunda, Dublin on this day. The aim of the new organisation was to counter the Ulster Volunteers in providing a similar force for Irish nationalists in the event of an armed confrontation over Home Rule. The first President was Eoin MacNeill but it drew support from a wide spectrum of Irish nationalist opinion.

The idea arose from an article he wrote some weeks previously in An Claidheamh Soluis [Sword of Light], an Irish language newspaper. His proposal was called ‘The North began’. In it MacNeill put forward the idea that a Force be established that would counter the formation of the UVF in the North. He intended to ensure that Irish Nationalism was not left unarmed and vulnerable as the political situation developed. It estimated that some 7,000 people went to the Rotunda’s Large Concert hall that night, with some 4,000 inside and another 3,000 outside. The meeting was called with the specific intention of raising a National Volunteer Force to be called ‘The Irish Volunteers’. In the Notices issued around Dublin in advance of the meeting it was stated that:

The purpose of the Irish Volunteers will be to secure and maintain the rights and liberties common to all the people of Ireland.

The new organisation quickly mushroomed and by April 1914 it was estimated to have around 80,000 members and by July that year some 160,000 men had signed up but only a few thousands had any weapons with which to fight. Nevertheless such a formidable body of public opinion could not be easily ignored by the British Government and all the indicators were that a bloody clash of arms was imminent in the late summer of 1914 between the Nationalist and Unionist armed camps over the thorny issue of Partition.

Only the outbreak of the Great War in August 1914 precluded what otherwise would have been a Civil War here. The Irish Volunteers then split on the question of involvement in the Conflict with most though by no means all following John Redmond’s call for enlistment in the British Army while a core membership remained under MacNeill’s nominal control.