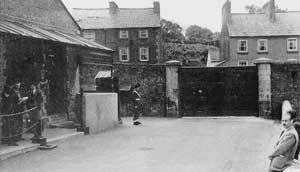 12 June 1954: The IRA Raid on Gough Barracks in Armagh on this day. In an audacious raid the Irish Republican Army seized control of a British Army barracks in Armagh and took 19 British soldiers captive while a party looted the Arsenal of its weaponry. This was the biggest raid carried out on the British Army since the War of Independence in 1921.

The barracks had been well staked out in advance with one of the IRA men joining the British Army some months before in order to be placed on duty there. With the information he garnered IRA GHQ were able to build up a comprehensive picture of the mode of operations of life at the base.

The operation was launched on 12 June 1954, from a farm just outside Dundalk. A large red cattle truck had been commandeered at the last moment and 19 IRA men, about half of the Dublin Brigade, climbed in and were informed as to what their target was. It was almost 3 o'clock on a busy Saturday afternoon when the cattle truck and a car drove into Armagh.

After overpowering the single unarmed guard on the gate the raiders then quickly fanned out and located the Arsenal. They had with them a huge bunch of keys (200!)* but finding the right key to the door proved something of a problem. Eventually the right key was found and in the men went to catch the astounded soldiers within completely off guard.

In less than 20 minutes the place was cleared out. The lorry carrying 340 rifles, 50 sten guns, 12 bren guns, and a number of small arms drove out of the barrack gates and back across the Border. The rearguard in a car followed after locking every gate and door for which they could find keys. At 3.25pm the first alarm in the barracks was given but it was not until 5 o'clock that the general alarm was given and by that time the big red truck was long gone....

This operation was a huge morale boost for the IRA after years in the doldrums and considerably raised their profile both at home and abroad. Conversely it was a huge embarrassment for the British Government and especially the British Army who had failed to secure a place of military operations under their charge from capture by enemy forces.

The barracks was closed in April 1960 as the British Army in the North re organised into Brigade Depots as opposed to Regimental ones. It had been the depot for the Royal Irish Fusiliers, Gough Barracks being allocated to that regiment in the 1880s and had been the regimental depot for more than half a century.

* the keys were later auctioned in America to raise funds for the IRA.