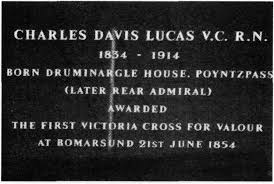 21 June 1854: Midshipman Charles Davis Lucas, by an act of outstanding bravery on board HMS Hecla was awarded the first Victoria Cross for his actions on this day. Midshipman Lucas was a native of  County Armagh.  He won the medal during a British Naval Expedition to the Baltic during the ‘Crimean War’. The fleet under Admiral Napier commenced a bombardment of the island fortress of Bomarsund. Three ships were sent forward to undertake the task, led by Captain Hall.

‘At the height of the bombardment, a live shell from an enemy battery landed on Hecla's upper-deck, with its fuse still hissing. All hands were ordered to fling themselves flat on the deck, but Lucas, with what Hall called in a letter to Napier next day 'great coolness and presence of mind', ran forward, picked up the shell and tossed it overboard. It exploded with a tremendous roar before it hit the water. Some minor damage was done to the ship's side and two men were slightly hurt but, thanks to Lucas, nobody was killed or seriously wounded. He was immediately promoted to Acting Lieutenant for his bravery, and the Admiralty later confirmed the promotion on Napier's strongest recommendation.’
'The VC at Sea' by John Winton.

The 6-gun steam paddle sloop Hecla was under the direct command of Capitan Hall himself who reported to the Admiral that:

With regard to Mr. Lucas, I have the pleasure to report a remarkable instance of coolness and presence of mind in action, he having taken up, and thrown overboard, a live shell thrown on board the 'Hecla' by the enemy, while the fuse was burning.

Queen Victoria invested Charles Lucas with his Victoria Cross on the 26th June 1857 in Hyde Park, London. Lucas eventually reached the rank of Rear Admiral in the Royal Navy. He died on the 7th August 1914, aged 80, at his home in Great Culverden, Kent, and was buried in St. Lawrence's Churchyard, Mereworth.