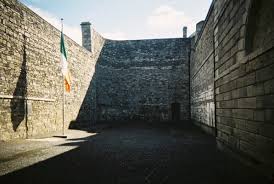 3‭ ‬May‭ ‬1916‭ – ‬Padraig Pearse,‭ ‬Thomas Clarke and Thomas MacDonagh were executed at dawn  by firing squad on this day. They were shot in the stonebreakers yard [above] of Kilmainham Jail, Dublin on the orders of General Maxwell.

‭Pearse, MacDonagh and Clarke were all shot minutes apart by a firing squad of British soldiers drawn from the Sherwood Foresters Regiment. They were commanded by a Major Rhodes. As far as we know all died bravely but while Pearse wished to die and Clarke reckoned execution was better than imprisonment again at the hands of the British it was a different story for McDonagh as he left a wife and young family behind him.

‭After their deaths had been confirmed the bodies were quickly transported to Arbour Hill prison where their remains were buried in quicklime. They were the first of 16 men to be executed for their part in the Rising. But their deaths rather than suppressing dissent ignited it and lit the spark that turned them from ‘rebels’ into Heroes.