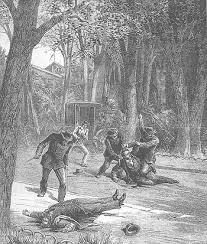 6 May 1882: The Assassination of Cavendish & Burke aka The ‘Phoenix Park Murders’ on this day. The Under Secretary for Ireland Thomas Henry Burke, and the newly arrived Chief Secretary Lord Frederick Cavendish, were both stabbed to death in the Phoenix Park by members of a secret organisation known as ‘The Invincibles’. Five of the assassins were later executed in Kilmainham Jail and a number of others were sentenced to long terms of imprisonment. This event rocked Anglo-Irish relations to the core and was the most shocking and audacious attack on members of the British Political Establishment in Ireland during the course of the 19th Century.

The Phoenix Park tragedy, as it may well be called, occurred on the evening of Saturday, May 6, 1882. Its victims were Mr. Thomas H. Burke, the under-secretary, and Lord Frederick Cavendish, the new chief-secretary. Undersecretary Burke, on that evening, was walking from the Castle to his lodge or official residence in the Phoenix Park, when he accidentally met Lord Cavendish, who accompanied him in the direction he was going.

When near the Phoenix Monument, they were surrounded by five or six men, armed with knives, who attacked them instantly. Surprised and unarmed the secretaries made scarcely any resistance, and were stabbed and hurled to the ground where they expired in a few minutes.

Cavendish – who was married to Lucy Cavendish the niece of British Prime Minister William Ewart Gladstone, and had worked as Gladstone's personal secretary – had only arrived in Ireland the day he was assassinated! He was not the main target but Burke. He had just met by chance with him as they walked towards the vice regal Lodge and was a man of whom it could be truly said he was in the wrong place at the wrong time.

The hunt for the perpetrators was led by Superintendent John Mallon, a Catholic who came from Armagh. He suspected a number of former Fenian activists. A large number of suspects were arrested and kept in prison by claiming they were connected with other crimes. By playing off one suspect against another Mallon got several of them to reveal what they knew.

The 'Invincibles' leader James Carey, along with Michael Kavanagh and Joe Hanlon agreed to testify against the others. Joe Brady, Michael Fagan, Thomas Caffrey, Dan Curley and Tim Kelly were convicted of the murder and were hanged by William Marwood in Kilmainham Gaol in Dublin between 14 May and 4 June 1883. Others were sentenced to serve long prison terms.