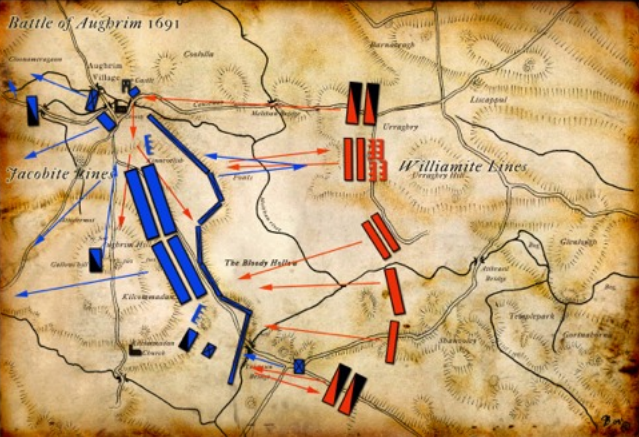 22 July N.S./12 July O.S. 1691. The Battle of Aughrim (Irish: Cath Eachroma) was fought on this day. The battle was fought near the little village of Aughrim in County Galway. The defeat of the Jacobite forces by those of the Williamite Army decided the War of the Two Kings in favour of King William of Orange. It is considered the bloodiest battle in recorded Irish History.

Ever since the Battle of the Boyne in July of the previous year the Catholic Jacobite armies had been on the defensive. King James had fled back to France never to return. Dublin and all the major cities of Ireland bar Galway and Limerick had fallen to the armies of King William of Orange. In June 1691 the line of the Shannon had been breached at Athlone and the Jacobites were retreating towards the city of Galway. It was decided to make a last stand at Aughrim and hope that the fortunes of a pitched battle would go in their favour. That way they would at least have a chance of turning the tide of the War back in their direction.

The Commander of the Catholic forces of King James II was the Marquis de St. Ruth, a veteran General of the French King Louis XIV. He had only arrived in Ireland in March that year. Although he had fumbled the defense of Athlone and thus allowed the Williamites to get across the Shannon he was determined to stop them reaching Galway. It was he who decided to make a stand at the village of Aughrim and on the ridge to the south of that settlement.  A pitched battle is a risky business and not all his Generals agreed it was worth it. But St Ruth realised that further retreat would only see the slow disintegration of his formations into a rabble incapable of effective resistance.

The position was a good one as to its front was an almost impassable bog that meant that any attackers would be forced to make their main efforts either along the causway leading to Aughrim or else at the ford to the south of the ridge which was a difficult crossing point. The Irish deployed some 15,000 - 20,000 men of various quality in regiments and squadrons of Infantry, Cavalry and Dragoons [mounted musketeers]. They had some nine field pieces to play upon the Enemy.

Their opponents under Dutch General Ginkel, an experienced soldier had advanced from Ballinasloe that morning and it was late in the afternoon before either side came in contact with the other. Ginkel’s Army was perhaps 20,000 strong and also made up of Infantry, Cavalry and Dragoons with some half its ranks made up of Continental Regulars and half from amongst the British population of both Britain & Ireland.

To Ginkel it was an unexpected battle but he handled his dispositions well sending the bulk of his force to push on the southern flank of the Irish and pin them there. After  heavy fighting his men slowly made it across Tristaun Bridge and into the right flank of the Irish but were finally halted at a dip in the landscape called ever after ‘Bloody Hollow’. But this could not be held by the Irish without pulling troops across from their left  flank - perhaps unavoidable but St Ruths decision to reinforce his right at the expense of the left was to have baleful consequences for his Army.

Further north the Protestants advanced into the bogs in order to cross over and engage the Catholic infantrymen drawn up behind hedgerows and prepared positions. Their initial attempts were partially successful but very costly, they were thrown back and some units were routed and senior officers captured. St Ruth was elated by the efforts of his Irishmen calling out ‘Le Jour est a nous mes enfants!' Again though more men were committed here by him who could not be used elsewhere. So far the Irish had fought very well and stopped all the enemy attacks from advancing to a critical point.

It was though to the north around Aughrim village and the ruins of Aughrim Castle the battle was decided. It was on this flank that the Scottish General Mackay held command. Here a narrow causway had to be crossed to get behind the Irish left flank. Mackay could see that the battle was at a critical stage as elsewhere the attacks of his fellows had been checked. The momentum had been lost and in if you will a last throw of the dice he led his troopers forward to take the causway and turn the battle. He fell from his horse and the Hugenot Marquis de Ruvigny[later Earl of Galway] led the attack in. Against the odds he made it through.

Burke’s Regiment in the Castle ran out of ammunition and could not stop the advance of the enemy. The Irish Horse under Luttrel and Sheldon were strong and in position. Incredibly they did nothing but quit the field of battle! To this day we do not know why, Treachery is suspected but nothing proven. But with them gone the position was well and truly turned and the Williamite cavalry swept down into the rear of the Irish ranks.

St Ruth soon got wind of this and moved north to check the dangerous situation in his left rear. Then Fortune truly turned her gaze against the Irish that day as a cannonball took his head clean off! Nothing could stop the disintegration by then and the infantry broke and ran for the bogs. Night soon came on and a misty rain began to fall and that must have saved many. But many, very many, had fallen in the fighting and the pursuit that followed.

The Jacobite defeat was complete. They lost eleven standards of cavalry and dragoons, the colours of thirty two infantry battalions, nine field guns, all their ammunition, tents and camp equipment, most of their small arms and about 4,000 men killed.The Williamites too suffered heavily. Their casualties are variously stated; they were probably as many as 2,000.
Aughrim 1691, Irish Battles G.A. Hayes-McCoy

It was all over - there was no way another Field Army could be put together after a Defeat of this Magnitude. Galway surrendered on 21 July [OS] and Limerick on 3 October [OS]. The Treaty of Limerick was the end of Catholic Ireland for over a Century. It was also to be over a hundred years before another pitched battle was fought on the soil of Ireland during the Risings of 1798.