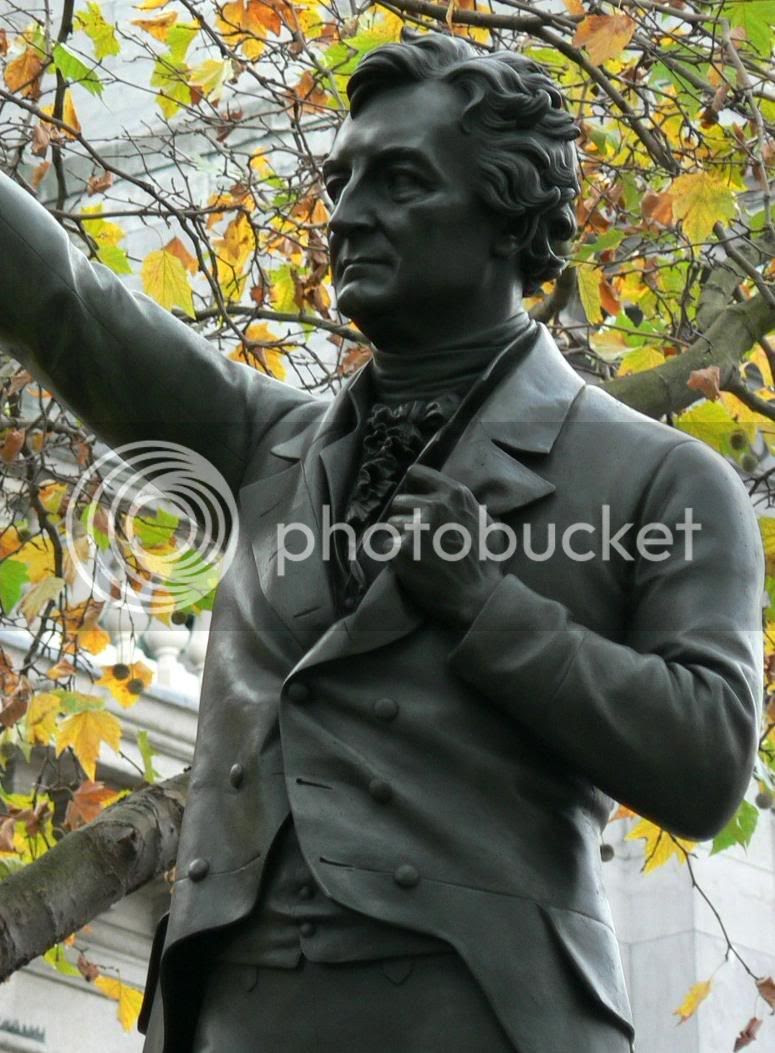 4 June 1820 - Henry Grattan, the moving force behind the Irish Parliament at College Green Dublin before it was dissolved by the Act of Union, died on this day in London.
Grattan was born at Fishamble Street, Dublin, in 1746, and baptised in the nearby church of St. John the Evangelist. A member of the Anglo-Irish elite of Protestant background, Grattan was the son of James Grattan MP, of Belcamp Park, County Dublin and Mary youngest daughter of Sir Thomas Marlay, Attorney-General of Ireland, Chief Baron of the Exchequer and finally Lord Chief Justice of the Court of King's Bench (Ireland). He thus came from a very privileged and aristocratic background.
Grattan was a distinguished student at Trinity College, Dublin where he began a lifelong study of classical literature, and was especially interested in the great orators of antiquity.
He entered the Parliament of Ireland in 1775, sponsored by Lord Charlemont. He quickly established a reputation as a brilliant speaker and one who was determined to press the Crown for Legislative Independence for Ireland. With Britain bogged down in the trying to suppress the American Revolutionaries he saw his chance to make his case. In this he was able to rely on the Anglo-Irish Volunteers who organised a Volunteer Army to 'Guard' the Country as more British troops were sent out of Ireland to fight in America. As a result of such agitation in 1782 the restrictions on Ireland having to submit legislation to the English Privy Council for prior approval or rejection was removed. It was to be Grattan's greatest Triumph.
For his efforts in securing Legislative Independence he was awarded £50,000 by the House of Commons in Dublin 'in testimony of the gratitude of this nation for his eminent and unequalled services to this kingdom'. The money allowed him to by a house in Tinnehinch, co. Wicklow, and an estate at Moyanna in Queen's county (County Laois) .
However the subsequent operation of 'Grattan's Parliament' was limited by its restrictive nature, its members being confined to those of the Established Church, and thus the exclusion of Catholics and Presbyterians from its benches. Crucially it had no independent Executive, all Ministers being in the gift of the Crown.
Grattan, in the aftermath of the outbreak of the French Revolutionary Wars in 1792, was able to achieve one more success by helping to bring in legislation that gave a limited franchise to Catholics in a 'Catholic Relief Act'. The expectation was that the logical conclusion to such a move was that Catholic Emancipation (the right of Catholics to sit in Parliament) must come about sooner rather than later.
In this Grattan and his supporters were to be disappointed, especially in 1795 in the quick recall of the new Lord Lieutenant Fitzwilliam. He had privately asked Grattan to propose a Bill for Catholic emancipation, promising the support of Pitt the British Prime Minister. But finally it appeared that the he had either misunderstood or exceeded his instructions; and on 19 February 1795 Fitzwilliam was recalled to London as the forces of Reaction had undermined him.
While Grattan kept a cool head in the aftermath of this setback his ability to influence the political scene was severely undermined as the forces of Revolution and Reaction took centre stage. He retired from politics in 1797 and though his name was implicated in the Rising of 1798 it would appear these accusations were unfounded.
With the prospect of a Union between Britain and Ireland looming in the aftermath of the crushing of the Rising he returned to Parliament to fight for its continued existence. When he was defeated in that effort he again stepped down but was returned for Dublin City in 1805 and took his seat in Westminster.
Here his oratorical skills were recognised and admired as one of the great parliamentarians of the age but as one amongst hundreds his influence was negligible and he was left in the Limelight. He continued to press for Catholic Emancipation but with conditions attached - re the appointment of Catholic Bishops being within the approval of the British Government. As the years wore on he made less and less appearances in the House of Commons and reluctantly accepted that the Union was now a political reality.
In 1820 he left Ireland for London to attend the House once again but fell ill while there. He died at Portman Square, Baker Street, London on the 4th of June. He had wanted to be buried back home but such was the respect he had in the British Parliament that it was decided to bury him amongst the great and the good in Westminster Abbey.
As the only Irish politician to have a phase of parliamentary history named after him -'Grattan's Parliament' - Henry Grattan is unique in Irish history.
There is a fine statue of him [above] situated in College Green Dublin facing his old Alma Mater of Trinity College