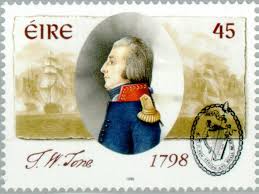 10 November 1798: The Court Martial of Theobold Wolfe Tone commenced on this day. A court was assembled consisting of General Loftus, who performed the functions of President, Colonels Vandeleur, Daly, and Wolfe, Major Armstrong, and a Captain Curran; Mr Paterson performed the functions of a Judge Advocate. At an early hour, the neighbourhood of the barracks was crowded with eager and anxious spectators. As soon as the doors were thrown open, they rushed in and filled every corner of the hall. Wolfe Tone was brought in and appeared before the crowd dressed in the in the uniform of a Chef de Brigade of the Army of the French Republic [above]. This created quite a stir and Tone was allowed to address the Court as to his motivations for the actions he had undertaken. On balance he did pretty well in getting his case heard at all. His noble and open admission of his role of been found in arms against the soldiers of the King of England in his native country of Ireland was admired by some but removed any small chance that he might escape execution. He concluded his defence (if it may be called that) with the words:

As to the connection between this country and Great Britain, I repeat it, all that has been imputed to me, words, writings, and actions, I here deliberately avow. I have spoken and acted with reflection, and on principle, and am ready to meet the consequences. Whatever be the sentence of this Court, I am prepared for it. Its members will surely discharge their duty; I shall care not to be wanting to mine.

Tone’s last request was that he would be shot by shot by a platoon of grenadiers in the uniform of a Chef de Brigade in the French Army. This plea along with his statement to the Court was conveyed to Lord Cornwallis for consideration but quickly rejected. Wolfe Tone was then sentenced by the members of the Court Martial to die the death of a traitor within 48 hours on the 12 of November 1798.