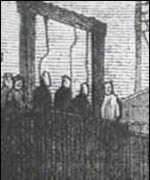 23 November 1867: Execution of the Manchester Martyrs William Philip Allen, Michael Larkin and Michael O’Brien. They were publicly hanged for their alleged role in the rescue of Fenian prisoners in which a Constable Brett was fatally wounded. Although neither Larkin, Allen and O’Brien had fired the fatal shot nor had they had any intention to kill anybody, they were hanged as accessories to the death of the policeman.

The martyrs were hanged in front of the New Bailey prison in Salford, Manchester. Part of the wall was removed so that the public could witness the event. The morning of their execution was a cold and foggy one. Large crowds, marshalled by police and troops had assembled to witness the spectacle. Shortly after 8 O’Clock the men were led out and hanged, the bodies dropping out of sight into the pit below and out of sight of the onlookers.

They were buried in quicklime in Strangeways Prison. Today they rest in a mass grave in Blackley Cemetery, Plot number C.2711. Manchester. Their noble stand in the dock and on the gallows inspired T. D. Sullivan to pen the famous ballad ‘God save Ireland’.

When the news of their execution reached Ireland, solemn funeral processions were held, and three coffinless hearses proceeded to Glasnevin Cemetery, followed by 60,000 mourners. Allen was a native of Tipperary, O'Brien came from Ballymacoda, Co. Cork, and Larkin from Lusmagh, Co Offaly.

It was widely felt amongst the Irish both at home and abroad that these men were wrongly hanged as it was not their intention to kill and nor had they. The brave and courageous stand they took in the Dock and upon the Gallows inspired Irish People around the World and helped to restore morale in the wake of the abortive Rising of 1867.


Ironically the first prisoner to utter these immortal words was one O'Meagher Condon who had his death sentence commuted to Life Imprisonment while another man Thomas Maguire was released from captivity as the case against him was so poor even the English Media felt he should be set free.


Numerous monuments were erected to the Martyrs in the wake of their deaths across Ireland incl a symbolic grave to these brave men in Glasnevin Cemetery, Dublin.

The famous song, which their sacrifice gave birth to, opens with the lines:
High upon the gallows tree, swung the noble-hearted three,
By the vengeful tyrant, stricken in their bloom.
But they met him face to face with the courage of their race,
And they went with souls undaunted to their doom.