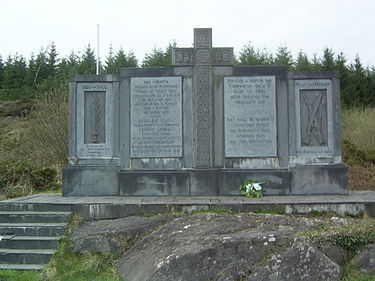 28 November 1920: The Kilmichael Ambush on this day. Commandant Tom Barry, of the West Cork No. 3 Brigade Column led the IRA in an ambush on the Auxiliaries near the village of Kilmichael in Co Cork. It was a pre planned operation which Barry organised with the intention of inflicting maximum casualties on the Auxiliaries who had quickly acquired a notorious reputation on their deployment here. The targets were packed into two Crossley tenders, each with nine cadets of the Auxiliary Division of the RIC on board - all ex officers - who were travelling from their base in Macroom towards Dunmanway when they were ambushed about one and a half miles south of the village of Kilmichael.


After the Column had waited since dawn in the biting cold the Auxiliary unit was spotted approaching the ambush position just after 4 pm. Barry in a uniform stood in the road as the enemy column approached to slow it down and when the lead vehicle halted a mills grenade was lobbed at it to open the ambush. Then the IRA men opened a ferocious fusillade of rifle fire and swept both vehicles end to end. The first tenders’ occupants were all dealt with and left either dead or dying. However the second one had time to react and its members were able to gain cover and return sustained fire. Some of the Auxiliaries called out ‘We surrender’ but when men rose to take them in they were cut down. Barry had by this time worked his way around to the rear of the pinned down group and let them have it. He shouted orders that there was to be no let up until he gave the word. No prisoners were taken. Amazingly only about half the Column had actually fired upon the British as the fight was over in minutes with many of the men out of the line of fire before Barry called a halt.


With dusk falling he reassembled his party and as some of the men were a bit shook up he decided to jerk them back into a proper frame of mind so as to be able to face the rigours ahead on that night. After giving orders to fire both the tenders he drilled them on the road there and then by the light of the burning vehicles. He then led his victorious column away to safety. 16 of the Auxiliaries lay dead on the roadside and although the IRA lost three men killed in action the Auxiliaries power had been broken.


The Kilmichael Ambush was a propaganda coup for the IRA. Never again would the Auxiliaries prowl the country roads of Ireland with impunity. As far as they were concerned in a fair fight they had been shown not to be supermen but mere mortals who when taken unawares and in close combat were found wanting.


The names of the men who died for Ireland that day were: