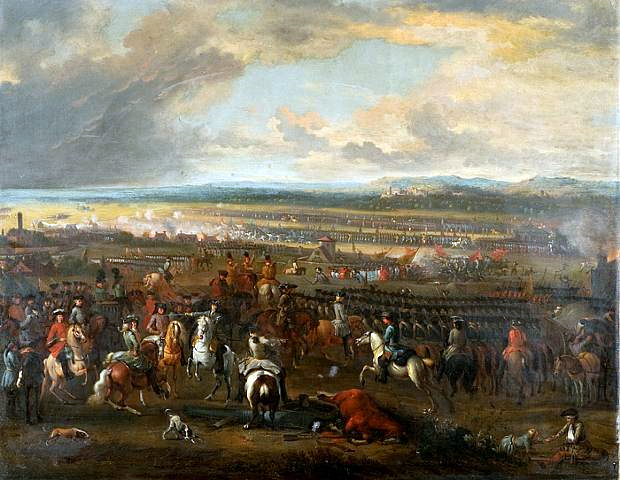 1 September 1701: The Irish Brigade in the service of France fought in the Battle of Chiari on this day. This clash of arms took place in Italy during the War of the Spanish Succession. The French Army was under the command of Marshal Villeroy who was opposed by Prince Eugene of Savoy who was in the service of the Austrian Empire. Villeroy decided to attack the town of Chiari as he felt it was his duty to fight for King Louis rather than just observe the enemy.

Villeroy ignored Catinat's warning that Eugene was in a strong position, remarking that the King, had not sent so many brave men just to look at the enemy through their spy glasses

The attack was however a fiasco as the French were cut down in droves. Amongst the regiments leading the attack was the Irish regiment of Galmoy (Its Colonel was Pierce Butler, 3rd Viscount Galmoy), which suffered heavily in the assault. Eventually the attempt was called off and the surviving troops were told to retire.

The French losses were over 2,000 men killed or wounded while their enemies sustained a loss in the low hundreds. Some of the Irishmen who survived were badly wounded. Felix MacNamee, aged 35, a native of Armagh, had had his left arm taken off by a cannon ball and, put out of service, was admitted into the military hospital of Les Invalides, dying at Arras in 1726. The ensign of the Colonel’s company, Terence Sweeny, aged 33, was hit in the right thigh by cannon shot and across the body by a musket ball. He too, was admitted to Les Invalides and survived until 1750. Also hit by a cannon shot in the right leg was the reformed Lieutenant Thomas Meade, aged 31, a native of Kilmallock, who survived until 1736. John Conor, aged 31, a Kerryman and the sergeant of grenadiers, lost his right arm though a musket ball but lived until 1721.