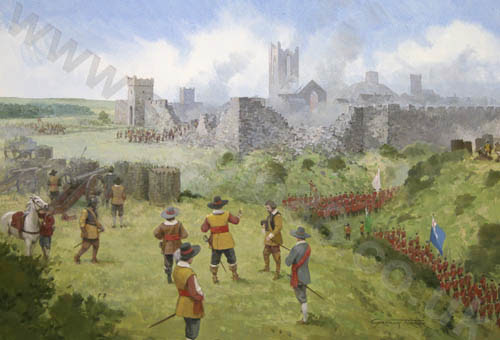 11 September 1649: The Massacre at Drogheda/ Droichead Átha on this day. It was carried out by the troops of Oliver Cromwell. The town was protected by a circuit of walls four to six feet wide and twenty feet high that were studded by a number of guard towers. Sir Arthur Aston (an Englishman) was the commander of the Royalist garrison and was convinced he could hold the town against the Parliamentary Army.

But Cromwell had shipped over to Ireland a siege train that was put to work against the walls and within days had made a breach wide enough for the besiegers to risk a storming. By noon on 11 September, the heavy siege guns had blasted breaches in the southern and eastern walls and demolished the steeple of St Mary's Church. Around five o'clock that evening, Cromwell ordered the storming to begin.
The defenders put up a spirited defense and cost their attackers dear. In a furious passion, Cromwell ordered that no quarter was to be given. Catholic priests and friars were treated as combatants and killed on sight and many civilians died in the carnage as the ‘Roundheads' ran amuck.

About 3,000 men of the Royalist garrison, both Irish and English soldiers were killed with the majority being put to the sword after they had laid down their weapons. Aston was bludgeoned to death with his own wooden leg, which the Parliamentarian soldiers believed to be filled with gold coins. In addition at least a 1,000 Catholic inhabitants of the town were massacred.

However a good number of the occupants of the town made it over the north wall that was left unguarded by Cromwell’s men and made their way to safety. There they related the horrendous events that took place in Drogheda on that infamous day.

Cromwell wrote afterwards that:
"I am persuaded that this is a righteous judgment of God upon these barbarous wretches, who have imbued their hands in so much innocent blood and that it will tend to prevent the effusion of blood for the future, which are satisfactory grounds for such actions, which otherwise cannot but work remorse and regret."