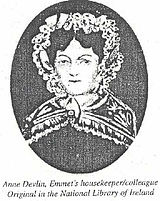 18 September 1851: The death of Ann Devlin – Patriot - on this day. Her role in Irish History was a brief one and entirely sub ordinary to that of greater players on the stage than her. But while others have faded away with the passage of time her name is still remembered and admired to this day by those who are familiar with the events of 1803 in Ireland.
She was born circa 1780 into a farming family near Rathdrum Co Wicklow. Her father Bryan Devlin was committed to Ireland becoming an Independent Nation and raised his family to be the same determination. When the Rising of 1798 came he became a suspect in the eyes of Dublin Castle and was imprisoned in Wicklow Jail. He was released in 1800 and moved his family to the Dublin village of Rathfarnham. It was here that Fate played a part that placed Anne at the centre of the momentous events of 1803 and her place in Irish History.
Her father was still involved in the struggle for Irish Freedom and became acquainted with Robert Emmet who was planning another Uprising. To give cover to his designs a veneer of normality was essential and Mr. Devlin suggested that one of his daughters could play the role of ‘Housekeeper’ and convey messages across the City without arousing the suspicion. Eventually Anne was chosen for the role and she moved into the Emmet Household.
Eventually the Revolt kicked off pre-maturely on 27 July 1803 but quickly turned into a Fiasco and Emmet fled to the Wicklow mountains. He was eventually captured and executed. The Devlin family knew that sooner or later they would be implicated and they were tracked down and arrested. Ann herself was seized at the Emmet household at Butterfield Lane.

When the others came down she was examined. She said she knew nothing in the world about the gentleman, except that she was the servant maid, where they came from, and where they went to, she knew nothing about, and so long as her wages were paid she cared to know nothing else about them…The magistrate pressed her to tell the truth, he threatened her with death if she did not tell; she persisted in asserting her total ignorance of Mr. Ellis’s [Emmet’s] acts and movements, and of those of all the other gentlemen. At length the magistrate gave the word to hang her, and she was dragged into the court yard to be executed. There was a common car there, they tilted up the shafts and fixed a rope from the back band that goes across the shafts, and while these preparations were making for her execution, the yeomen kept her standing against the wall of the house, prodding her with their bayonets in the arms and shoulders, till she was all over covered with blood … and saying to her at every thrust of the bayonet, ‘Will you confess now; will you tell now where is Mr. Ellis?’ Her constant answer was ‘I have nothing to tell, I will tell nothing!!!’
The rope was at length put about her neck; she was dragged to the place where the car was converted into a gallows; she was placed over it, and the end of the rope was passed over the back-band. … She had just time to say, ‘The Lord Jesus have mercy on my soul,’ when a tremendous shout was raised by the yeomen: the rope was pulled by all of them, except those who held down the back part of the car, and in an instant, she was suspended by the neck. After she had been thus suspended for two or three minutes, her feet touched the ground, and a savage yell of laughter recalled her to her senses. The rope around her neck was loosened, and her life was spared: she was let off with a half hanging’
The life and times of Robert Emmet, Esq (1847) by R.R. Madden

Ann and her family were then incarcerated in the notorious Kilmainham Jail in Dublin where they were subjected to further interrogations and deprivations. They were released in 1806 when they were no longer considered a danger to British Rule. She quickly faded into obscurity.
It was only years later that Dr. Madden, the Historian of the United Irishmen, tracked her down to a tenement in the Liberties of Dublin that her story was told. She had married a man called Campbell, had children and records show she probably had a good job as the Laundress in St Patrick’s Hospital but she eventually lost the position when new management were appointed. She fell on hard times and Dr. Madden found her living the life of a ‘Common Washerwoman’ taking in dirty laundry to clean. When she died she was buried in a pauper’s grave in Glasnevin cemetery Dublin. Afterwards Dr. Madden had her remains moved to a more desirable part of the cemetery. He also paid for the erection of a headstone which was later replaced by a large Celtic cross. [above]