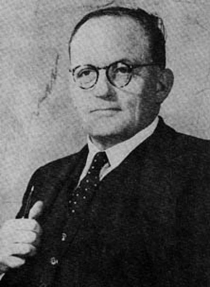 26 September 1902: The birth of James Dillon in Dublin on this day. Dillon was to become one of the most colourful and entertaining politicians in Ireland during the mid 20th century and was Leader of Fine Gael from 1959 to 1966. He came from a family of politicians, his father John Dillon & his grandfather John Blake Dillon had been Members of Parliament under the British Regime and had supported Home Rule.

James Dillon qualified as a Barrister and was called to the Bar in 1931. He then went abroad to study business methods in Britain and the USA before returning home to run the family business. But it was in the field of politics that he made his mark. Between 1932 and 1937 Dillon served as a TD for the Donegal constituency for the National Centre Party and later for Fine Gael. He played a key role in instigating the creation of Fine Gael and would become a senior member of the party in later years. He remained as TD for Monaghan from 1937 to 1969.

An intelligent man with an impressive oratory and a brilliant command of rhetoric he was perhaps too finely tuned an individual at times for his own good. He was in some respects a loner who stood out from the crowd. None more so than in the years of the Emergency when he advocated the Irish Free State joining the Allies in the war against the Axis Powers. He resigned from Fine Gael in 1942 over its refusal to back him on this.

The historian J.J.Lee believes that Dillon ‘showed great courage, if doubtful judgement, in defying the over-whelming consensus of Irish opinion, including that of his own party, in increasingly urging support for Britain and America, a position which obliged him to resign from Fine Gael in 1942 and plough his political furrow as an independent...
Times Literary Supplement 13 April 2001

After the War he was still an Independent and in that role served in the Cabinet as Minister of Agriculture (1948-1951) & later after re-joining FG in the same role in 1954-1957 in the inter Party Governments of John J. Costello. Times were very hard then but he made as good a job as he could of the role he was given. One of his major achievements as Minister for Agriculture was the Land Reclamation Programme. This scheme meant that more productive agricultural land was made available, especially in the West of Ireland.

In 1959 his fortunes changed again when he was elected Leader of Fine Gael and thus Leader of the Opposition. Brilliant oratorical performances followed but it was hard to dent the Fianna Fail Government of those years that oversaw the most dramatic rise in Irish living standards that had ever been seen. His last opportunity  came at the General Election of 1965 but a failure to cut a deal for a Coalition with the Labour Party meant that the odds were stacked against him and his Party. In the event Sean Lemass was returned as Taoiseach and Dillon’s tenure as Leader of Fine Gael came to an end. He retired from active politics in 1969 when he did not contest the General Election of that year. He died in Dublin in 1986 at the age of 83.