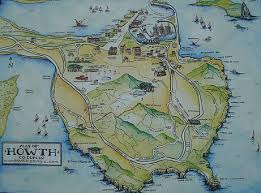 10 August 1177: The Battle of the Bridge of Evora was fought on this day. It was fought between the Anglo-Normans of Dublin & what were probably a band of armed Norsemen who some years previously had been driven from the city by the Anglo Normans and had made camp near Howth in order to make a living through raiding and piracy. While the affair is to some degree lost in the mists of time it is probable that the recent Invaders launched a counter attack on this band of Nordic desperadoes in order to eliminate this threat to the new Colony.

‘A desperate battle was fought at "The Bridge of Evora," which crossed the small river, called "The Bloody Stream," flowing into the sea near the railway station, and, after heavy losses on both sides, the natives were completely defeated. This battle having been fought on 10th August (Feast of St. Laurence, the Spaniard), the Tristram family, in commemoration of the event, thereafter assumed the name of St. Lawrence.

Tristram was one of the Norman adventurers who came over to Ireland at the time of the Invasion, and had achieved a distinguished record for his prowess on many a hard-fought field. He and Sir John De Courcy sailed to Howth in 1177, accompanied by a chosen band of fighting men, and on landing were opposed by the inhabitants, mostly Danish pirates who had settled in this neighbourhood.

The following extract on the subject is taken from Hanmer's Chronicles of Ireland, but it may be observed that his account rests on no very certain authority, and that the entire circumstances connected with the landing and battle at Evora are involved in considerable obscurity:

"They landed at Howth and there fought a cruell fight by the side of a bridge, where Sir John De Courcy, being sickly, tarried about the shippe. Sir Armoricus, being chieftaine and generall of the field by land, behaved himselfe most worthily. Many were slaine on both sides, but Sir Armoricus got the victory, with the losse of seven of his owne blood, sonnes, uncles and newphewes; whereupon, for his singular valour, and good service, there performed, that lordship was allotted unto him for his part of the conquest.''

A vague tradition of this battle seems to have lingered in the neighbourhood, and is to some extent corroborated by the discoveries of human bones, antique weapons and armour, which from time to time have been made during excavations for building purposes in the vicinity of the railway station.’

The Neighbourhood of Dublin by Weston St. John Joyce

One puzzle to this account is that John De Courcy spent that year campaigning in the North of Ireland. Why he detoured his desperate battle to carve out a power base in Ulster to sail back to Dublin is a moot point. One possible explanation is that these Norse seafarers were taking supply ships or cutting the arterial roads leading north out Dublin and he felt compelled to return south and deal with them. On the day though he was too poorly to take the field himself.