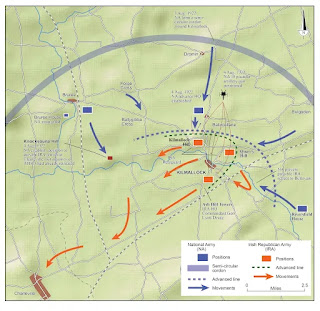 5 August 1922 - the fall of Kilmallock Co Limerick on this day and the end of the most formalised series fighting in the field in the Irish Civil War. The town was the key to the taking of the south Limerick - north Cork area that the Free State National Army had to secure to open up the road south to the city of Cork that was still in the hands of the Anti Treaty forces aka ‘the Irregulars’.

‘The geography of Kilmallock lent itself to a stubborn defence. A series of small hills surround and dominate the approaches to the town, which sits in a hollow on the banks of the River Loobagh. If the anti-Treaty forces could maintain a hold on these heights, then driving them from Kilmallock would be extremely challenging.’

Conventional warfare: the Battle of Kilmallock by Dr John O'Callaghan

In overall command of the immediate operations was Major General WRE Murphy [above] who had served in the British Army in the Great War and had seen extensive active service in France, Belgium and Italy. Facing him were some of the IRA’s most experienced commanders Liam Deasy, Officer Commanding 1st Southern Division, and Sean Moylan, Officer Commanding North Cork Brigade.

Both sides had problems within their own ranks. For the National Army it was primarily the rawness of the Officers and men who were not properly trained or led and were in many cases incapable of conducting basic military operations in the field. In the ranks of the IRA it was lack of supplies and the absence of artillery and heavy weapons to counter any attacks their opponents would launch against them. They also had a diminishing state of morale after the fall of Limerick city and the fear of being outflanked by naval landings in Kerry and Cork plus the rather obvious fact that most people did not want or support a Civil War to maintain an Irish Republic as opposed to an Irish Free State.

In the days preceding the attacks on Kilmallock the National Army had secured the villages of Bruff and Bruree after some brisk combats. For the attempt to take Kilmallock an elaborate plan was drawn up to stop the republicans from making good their escape without loss and orders for a semi encirclement of the town were issued. However the difficulties of getting men up to the front lines in any sort of formal order were continually frustrated the lack of experience of both officers and men and a lack of food supplies. Finally on the 4th August the attack was launched and made progress but by late afternoon it had stalled and Murphy called a halt as the men were exhausted.

That evening word reached the defenders that as feared the Free State had indeed landed at Fenit in Co Kerry and they decided to retreat back south to cover Cork more effectively. So on the following morning scouts reported that they could see no sign of enemy activity and General Murphy gave the order to advance. Thus ended the only set of engagements in the field that could be recognisably defined as active military manoeuvres in the Irish Civil War.