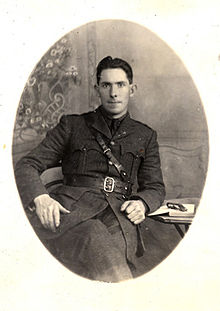 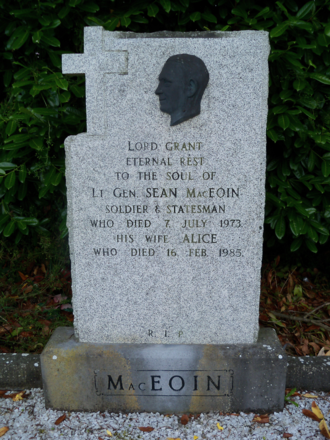 6 August 1921: Dublin Castle, the seat of the British Administration in Ireland, issued a statement to the effect that all TDs [elected members of  Dáil Éireann ] would be released from captivity - with one exception! That man was Seán Mac Eoin who had been sentenced to death for the murder of an RIC District Inspector McGrath in January 1921. During an attempt to escape he was shot and wounded he was later transferred to Mountjoy Prison in Dublin.

The Irish Cabinet met the same day and rejected the terms imposed by the British re the release of prisoners who were TDs and specifically the intended further incarceration of Mac Eoin and the threat of execution should the current peace negotiations fail. There was an objection from one member of the cabinet who did not feel it worth risking the fate of the negotiations for Mac Eoin’s life!

If the detention of Commandant is persisted in, I cannot accept responsibility for preceding further with the negotiations ...

In British legal phraseology he is termed a murderer; but for us, and I believe, for the world, he is a heroic Irishman.

Within days he was released and he went on to support the Treaty of December of 1921. ‘The blacksmith of Ballinalee’ went on have a successful political career in the new Irish State.

‘Seán Mac Eoin was a soldier during the War of Independence and leader of an IRA (Irish Republican Army) flying column in north Longford during that conflict. He was first elected a Sinn Féin TD in 1921 for Longford Westmeath. He also served in different constituencies for Sinn Féin, Cumann na nGaedheal and Fine Gael until his defeat in 1965. He was also Minister for Justice (1948-1951) and Defence (1951 and 1954-1957).'