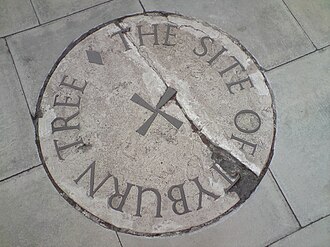 20 February 1644: The Execution of Sir Connor Maguire - ‘The Maguire’ of Fermanagh at Tyburn, London on this day*. He was hanged, drawn and quartered for ‘High Treason’. Maguire had been one of the leaders of the 1641 Rising in Ireland and was tasked with seizing Dublin Castle from the English. At the last moment the plans were discovered and the plot was aborted. He was quickly captured and eventually confessed to his role in the affair.

In June 1642 he and other prisoners were sent over to London and held in the Tower under severe conditions. They were then sent to Newgate Prison and held as ‘close prisoners’ - bread and water diet in close confinement. Moved back to the Tower they were treated somewhat better. The guard loosened Maguire and others managed to escape but while waiting for a ship to the Continent they were recognised and recaptured after just a few weeks of freedom.

'The peerage in Maguire’s case made a difficulty. There were several precedents for trying in England treasons committed in Ireland. That being admitted as good law, it was easy to show that an Irish peer was a commoner in England, and as such Maguire was tried. Many points of law were raised, but the facts were patent, and he was sentenced to be hanged, drawn, and quartered. On the cart at Tyburn Maguire was cruelly harassed about religious matters, but he remained firm. He carried in his hand some curious papers, partly of a devotional character, with directions as to how he should bear himself. He declared that he forgave all his 'enemies and defenders, even those that have a hand in my death,' and that he died a Roman catholic.'
Dictionary of National Biography

On February 20 1644 Lord Maguire to whom the executioner would have shown some favour by leaving him to hang on the gallows until he should be quite dead and meanwhile the executioner was busy kindling the fire with which his entrails were to be burned after his death but so inhuman were the officers that they totally denied Lord Maguire the services of one of our Fathers on the scaffold and they waited not for the executioner but one of them cut the rope with a halberd and let the Lord Maguire drop alive and then called the executioner to open him alive and very ill the executioner did it the said Lord Maguire making resistance with his hand and defending himself with such little strength as he had; and such was the cruelty that for sheer compassion the executioner bore not to look upon him in such torment, and, to have done with him, speedily handled his knife well and cut his throat.
Letter from Father Hugh Burke, bishop of Kilmacduagh
Eyewitness to Irish History
By Peter Berresford Ellis
* Near Marble Arch