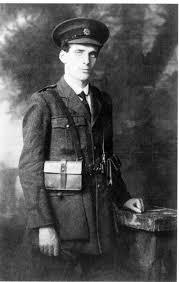 21‭ ‬February 1922: A new Police Force, the ‘Civic Guard’ began its first Recruitment campaign on this day. It was intended to replace the Royal Irish Constabulary as the instrument charged with Law enforcement within the prospective Irish Free State that was due to come into full operation by the end of the year.

In January‭ 1922, the Provisional Government had decided that the Royal Irish Constabulary was to be disbanded "as soon as possible". They decided to replace the Republican Police with a regular police force under a trained police officer. Michael Collins had reported to the Provisional Government on 28 January that a police organising committee was being formed, that would include members of the Royal Irish Constabulary and Dublin Metropolitan Police.

The committee held their first meeting in the Gresham Hotel on Thursday,‭ 9 February, with General Richard Mulcahy, Michael Collins, and Michael J. Staines among those in attendance. Work was started immediately under Michael Staines T.D. [above] as the acting chairman. A veteran of the Easter Rising he had been active in the administration of the National Arbitration Courts and the Republican Police during the War of Independence.

Volunteer Brigade Officers around the Country were requested to dispatch suitable recruits for training to a temporary headquarters at the Royal Dublin Society in Ballsbridge,‭ ‬Dublin. Any candidates who attended for examination were to be at least 5' 9", unmarried and between the ages of 19 and 27. They were compelled to sit examinations in reading spelling and arithmetic to gain entry as cadets. The first man to join the Civic Guard was an ex RIC man P. J. Kerrigan.

However the name‭ ‘Civic Guard’ was not formally decided upon until 27 February and on the following 10 March, ‬Michael Joseph Staines [above] was formally appointed as its first Commissioner. In August of the following year the Police Force of the State was renamed An Garda Síochána ‭ (Guardians of the Peace) and has remained the name of the Force ever since. Michael Staines was then retrospectively recognised as the first Commissioner of the Garda Síochána. His most famous saying was that:‬
The Garda Síochána will succeed,‭ ‬not by force of arms or numbers, but by their moral authority as servants of the people.