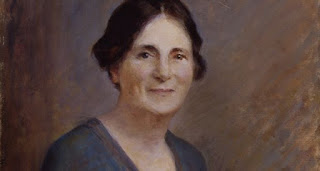 She was born in Killala, Co Mayo on 28 January 1874. She was the daughter of a Church of Ireland rector and at a young age decided to become a Doctor. She studied for her Degree at Royal University of Ireland in Dublin. After spending some years in the USA she returned home and after much trying secured a place with the Royal Eye & Ear hospital becoming the first female doctor to be taken on there. She also ran a private practice from her home at 9 Belgrave Road, Rathmines. It was through her contacts there that she became involved in Revolutionary politics. She supported the workers during the Dublin Lockout in 1913, and became a friend and supporter of James Connolly.

During Easter Week she was taken prisoner by the British but they were at a loss what to do with her as she did not fit the typical profile of an Irish ‘Rebel’. After a few weeks of captivity she was deported to England and sent to work with a Doctor in Bath. By the end of the year, she was back at her home in Rathmines, re-establishing her practice.

In 1917, she became one of four women members of the national executive committee of Sinn Fein. She campaigned for Constance Markievicz in the general election of 1918 and was one of five women elected to the Dáil in 1923 but as an abstentionist in opposition to the Treaty, she did not take her seat. She was a member of Rathmines Urban District Council and vice-president of the Irish Women Workers' Union.

But perhaps her greatest contribution was in the work of dedicated and professional care for very young sick infants. In 1919 Lynn together with Madeleine ffrench-Mullen (her life long companion) and a number of other politically-active medical women founded St. Ultan’s Hospital for Infants in Charlemont Street, Dublin. At that time in Dublin, infant mortality was 150 per 1,000 births and there was extensive malnutrition among the general populace.

The initial focus of the hospital was on treating those suffering from malnutrition and syphilitic infants due to an epidemic of that disease amongst the poorest of working class Dubliners - probably spread by returning soldiers disbanded after the end of the First World War. They started with a Capital of some $200 and Then we worked – and worked. By 1925 they had a hospital with 25 beds where babies could be treated and had set up what was practically a dispensary to teach mothers how to care for their babies at home.

Today her hospital is now long gone, closing back in the 1980s. But she was a lifelong campaigner for women’s and workers’ rights. Kathleen Lynn has been described as one of the great Irish humanitarians of the 20th Century. Her influence extended throughout Irish society with her work in hospital medicine, her fight against poverty and disease, her career as a politician and as a lifelong social revolutionary. From 1916 she kept extensive diaries of her life and work which are now housed in the archives of Royal College of Physicians of Ireland.

On her death she was given a full military funeral as befitted one who had fought for Irish Freedom in 1916. That and her work in the years thereafter to alleviate the sufferings of the little children from the streets of Dublin means that she deserves her place in the Pantheon of 20th Century Irish Women who strove to make Ireland a better place for her People.