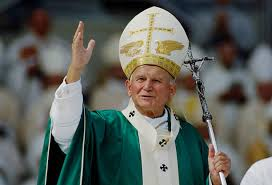 30 September 1979: Pope John Paul began the second day of his tour with a short visit to the ancient monastery at Clonmacnoise in County Offaly. With 20,000 in attendance, he spoke of how the ruins were "still charged with a great mission". Later that morning he celebrated a Youth Mass for 300,000 at Ballybrit Racecourse in Galway. It was here that the Pope uttered perhaps the most memorable line of his visit: "Young people of Ireland, I love you"

Pope John Paul II  had begun his visit to Ireland on the previous day. Ireland was the third pilgrimage of his Pontificate. The Holy Father's first visit was to the Dominican Republic, Mexico and the Bahamas, his second visit was to Poland and his third visit was to Ireland and the United States.

During his 1979 pilgrimage to Ireland, Pope John Paul undertook a hectic schedule travelling the country in order to greet the faithful in the four provinces of Ireland. Over the three days the Holy Father addressed large crowds in Dublin, Drogheda, Clonmacnoise, Galway, Knock, Maynooth and Limerick.

On that first day, September 29th, in the Phoenix Park, he had met over one million people, the largest gathering of Irish people in history. He told the people why he felt called to visit Ireland and the Irish. He reminded them how St Patrick heard the “voice of the Irish” and came back to Ireland.

The final day of the visit began with a brief early morning visit to St Patrick's College, Maynooth, the National Seminary, in County Kildare.

Some 80,000 people joined 1,000 seminarians on the grounds of the college for the brief visit. A dense fog delayed the Pope's arrival from Dublin by helicopter. The final Mass of the Pope's visit to Ireland was celebrated at Greenpark Racecourse in Limerick before 400,000 people, many more than had been expected.

By any standards the Papal visit had been a huge success. The numbers attending the various gatherings far exceeded what was expected. Pope John Paul had been an actor in his youth and he could keep an audience enthralled. With the benefit of 40 years hindsight it can be seen as the apogee of the popularity of the Papacy with the bulk of the Irish People. No longer was the Pontiff a remote and distant figure in Rome but a living human being amongst the Faithful of Ireland.