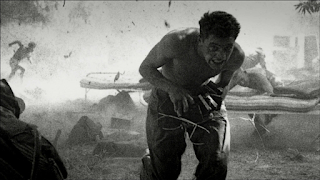 18 September 1961: Some 150 Irish soldiers quartered near the town of Jadotville Congo were led away into captivity on this day. They had been besieged for five  days in their isolated position and their CO - Commandant Patrick Quinlan - had concluded that their position was hopeless. The night before  he had agreed with the besiegers to lay down arms and accept their offer of ‘protection’. As dawn broke that morning the men of ‘A’ Company awoke to a new reality, rather than been respected Peacekeepers of the United Nations they were effectively POWS of the breakaway Congolese province of Katanga.

It was a sorry saga and one that should never have happened. Reports had reached UN Headquarters in Elizabethville in early September that the White population in Jadotville were been subjected to harassment and molestation. It was decided to despatch a Company of UN soldiers to maintain order there and keep the peace - a mission that fell to ‘A’ Company of the Irish Army to carry out. However on arrival Comdt. Quinn was told by both Black and White residents that their presence was not required - as there was no trouble there to subdue. But the situation was tense - very tense. They were clearly not wanted there and they were refused entry to the town and their position was encircled by the Katangese forces.

Then un-beknownest to the Irish garrison the UN HQ in Elizabethville had decided to engage in what turned out to be a ham fisted attempt - Operation Morthor - to  disband and disarm the Katangese rebel government of Mr Tshombe in that city. Retaliation was swift and brutal. The first the Irish in Jadotville knew that things and gone from tense to outright warfare was when on the morning of Wednesday 13th September as Mass was being heard the Katangese Gendarmie launched a series of attacks on their positions.

For the next five days the Irish held their ground even though they were surrounded by thousands of their enemies. If they had one factor in their favour it was that the Katangese Gendarmie were not a professional fighting force but a heavily armed police one. Still they had enough weaponry in machine guns, mortars and the assistance of a jet fighter-bomber to make the Irish know that they were a lethal threat to them. They also had the assistance of White officer mercenaries. But the biggest factor that made the situation hopeless if they were not promptly relieved was a very simple one - WATER! For without that no man can last more than a few days and expect to survive. In the heat of the Congo that was even more so. The besiegers cut the mains into the camp and after that it could only be a matter of time.

Relief attempts were soon organised from Elizabethville but the problem was there was only one road that led from there to Jadotville. Progress was made along it until the relief column reached the bridge over the river Lufira. Here the Katangese had blocked the bridge and lined up men along the riverbank to stop any force from breaking through. The Irish along with allied troops from the Indian and Swedish armies did all they could to storm the bridge but each attempt was beaten back. By Sunday it was obvious that the bridge could not be taken with the forces available. Rescue by air was out of the question as the enemy had air superiority in that they had one aircraft and the UN had none!

Serious negotiations began on Saturday when the Mayor of Jadotville Mr Munongo proposed terms. There would be a Ceasefire & joint patrols, the water would be turned back on, the jet would be grounded and the UN allowed to patrol the town. But it quickly became clear that the terms were not going to be kept.

We played a delaying game as long as we could on that Sunday, hoping against hope that reinforcements would arrive as we negotiated a definite ceasefire. I hoped that we would get a written ceasefire but soon Munongo was demanding surrender and only surrender terms, otherwise the final onslaught would begin. I  realised that our situation had become hopeless and that there was no prospect of relief arriving in time. I knew too that if I continued my men would be massacred by a vastly superior force so I agreed to the terms.

Under the Blue Flag by Raymond Smith

Thus ended the ‘Siege of Jadotville’ where the Irish Army held off thousands of enemies for five long days. The men were held in captivity until 25 October when they were handed back to the UN in a prisoner exchange. Their conditions of captivity ranged from good to fair to bad and sometimes to the point that their lives were in immediate danger - but they all made it out alive.

However surrender and captivity is never an easy burden for any soldier or Army to bear and when the men returned home there was a stigma attached to them by some - none more so on the head of Commandant Patrick Quinlan. He had been put in an impossible situation by UN HQ and was effectively ‘up the creek without a paddle’ in Jadotville. There is no doubt his career suffered as a result and it is only in recent years that it is accepted that the decision he had to take was the correct one. For at the end of the day all the men he led in battle made it back home. There are now only a few survivors left of those events so long ago but finally their grit, courage and determination has at last been recognised for their heroic stand at Jadotville back in 1961.